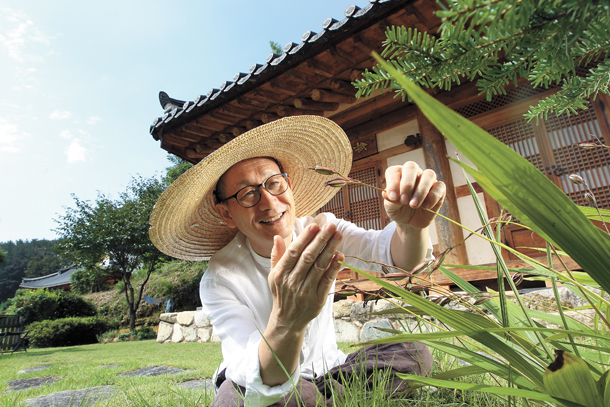 An expert in Korean plants, Kim Jong-won published the “Illustrated Guide to Korean Flora and Ecology, Volume Two” in September, which deals with a total of 208 Korean plants in roughly 800 pages. Volume one, which he published in 2014, also presents a wide variety of Korean plants.

As a plant sociologist and professor at Keimyung University’s life science department, Prof. Kim plans to introduce a total of 3,800 species of Korean plants, their forms, ecology and name origins in 10 volumes. He hopes to focus on plant stories related to Koreans’ daily lives, rather than simply listing scientific facts.

The JoongAng Ilbo recently sat down to speak with Prof. Kim about plants and his life.

Prof. Kim’s house in Dalseong County, Daegu, was full of books such as Latin and Greek dictionaries, “Donguibogam: Principles and Practice of Eastern Medicine.”

“What I do basically is plant registration,” the professor explained, “I organize plants based on their habitat, family line, history and friends (similar species).”

Plants introduced in Prof. Kim’s recent books are new to most people living in the city, who only recognize them as weeds. But for Prof. Kim, no single plant is a weed. He hopes to trace names of all plants, believing that “plants are our long-standing future.”

He said, “Going through classics is a boring task but I continue my research for the moment of finally tracking their origin.”

He recently discovered the origin of a species of grass named sheep fescue, a moment which he called cathartic.

He explained that tracing plants’ origins requires a lot of research, adding that many plants carry with them an important story.


Q. What are the most important greens for Koreans?

A. If you understand chives, then you understand so much about Korean greens and food. I believe that chives are the first greens that Koreans ate. There are 21 species of chives in Korea, all the way from the rocks on the seashore to the wetlands. Seasoning in Korean food originates from chives, which were avoided due to their strong smell in Japan, where many species of chives used to grow.


What do balloon flowers tell us about Korea?

The balloon flower is another one of the most important greens for Koreans, who commonly eat its roots. It’s always served at the table. Balloon flowers grow in northeast Asian countries, mostly on the Korean peninsula. But when Korean girls were forced to serve in Japanese military brothels during World War II, they were called balloon flowers. This was a terrible thing to do and is an ongoing issue.


What about bracken, known to be one of the best greens?

Bracken is one of the 12,000 species of fern that Koreans love to eat. The first Korean cookbook, “Eumsik dimibang,” explains how to tend young bracken, which were usually avoided by even herbivores, due to their poison.


Sheep fescue is an interesting name. What did you find out about its origin?

Sheep fescue usually refers to a type of plant grazed by sheep in the West. Chinese named the plant sheep fescue and Japanese cow fescue. I found the Korean words “gieum fescue” in a 17th century Chinese dictionary. I realized that “gieum” is an ancient word for weed, which refers to low quality, left-over crops. Like weed fescue, all names of Korean plants come from Korean history and culture.


Can you differentiate all 3,800 species of Korean plants?

I consider myself as a deep lover of nature. Looking at a single sprout tells me what the plant likes and how it will grow over the years. The plant’s past, present and future come to me like a video when I look at it.


Why did you become a plant sociologist?

I went to Kyungpook University to study biology in 1977. I was on a field study at Palbong Mountain’s fire region in Daegu when I discovered some growing rosy cow-wheat. When I asked an instructor how the plant grows in such a harsh environment, he didn’t have an answer, but instead recommended me to study plant sociology, which explores the relationship between plans and their environments. This was 30 years ago and I have stayed in the field of plant sociology ever since.


What did you do after graduation?

I entered Yokohoma National University in Japan in 1983 because Japan possesses more resources of Korean plants than Korea. The Japanese even made a map of Korean plant distribution during the Japanese colonial era. I then went to the University of Vienna, Austria, the birthplace of plant sociology. I wanted to study the vegetation of Manchuria and Russia’s Maritime Province but no diplomatic relations were established with either country at the time. Instead, I studied in Europe and went to almost 200 field studies a year.


Why did you want to study in China and Russia?

I have been there twice in the late 1980s. They are very much related to Korea and I didn’t want Japanese scholars to take the lead in the study of Korean plants. Once I wore a Chinese Mao jacket to study plants near Mount Baekdu. A Soviet KGB agent investigated me when I went on a field study in Russia. In hindsight, I was risking my life. But the experience got me a doctorate’s degree for comparative study of Korean, Chinese and Japanese oak trees. Oak trees thrive in Korea and China with their continental climate but Japan’s oceanic climate is more suitable for beech trees.


Do you think you can complete 10 volumes of your book?

I plan to write a volume every year. I even have plans after I am done publishing all 10 volumes. I’ll map out Korea’s regional vegetation areas. European countries all have their own vegetation maps. As for me, I’ve been everywhere in Korea. In order to make progress in vegetation, someone needs to map out current vegetation and predict what to expect in the future.


How do you expect to carry out your plans?

Even the Korean Standard Unabridged Dictionary and Encyclopedia of Korean Culture contains errors. I’d have to do my part and leave the unfinished work to the next scholars. But it’s sad to see more and more Korean plants disappearing. Cemeteries have now become a refuge for plants. But there is a saying that goes, “more haste, less speed.” I want to take time in carrying out my plans. It’s something I’ve learned from studying plants. Plants have shaped my life and I hope they continue to do so.