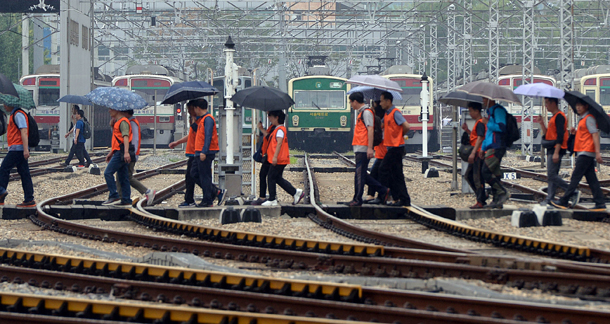 Seoul Subway Labor Union members in Seongdong District, eastern Seoul, head to the union headquarters to start their strike on Tuesday. The nationwide strike of public corporations’ employees is planned to be held without a scheduled end date. [NEWSIS]

Thousands of railroad and subway workers went on a nationwide strike on Tuesday against the expansion of a state-led merit-based salary system, saying they will be holding the strike without a scheduled end date, demanding the central government and public corporations scrap their plans.

“Korea Railroad Corporation [Korail] is pushing through the salary system without negotiating with us,” said the Korean Railway Workers’ Union on Tuesday. “We will be maintaining the number of employees necessary for maintenance of railroad services, but Korail must cease all plans to establish the state-led initiative on merit-based salary and start speaking with us.”

Many railroad and subway workers oppose the merit-based salary system for fear they may be fired if found wanting in assessments.

“This fight against the merit-based salary system is a fight against a system that will fire employees who do not meet the quotas,” said Choi Byeong-yong, chairman of the Seoul Subway Labor Union, in a video message to the union members. “It will be impossible to look after one another once the salary system is established. We have to save our workplace together.”

The Ministry of Employment and Labor announced on Tuesday that some 24,000 members of the Korean Public Service and Transport Workers’ Union and eight public companies are participating in the strike.

Despite the nationwide strike, trains and subways are being operated regularly during rush hours, after public railroad and subway corporations have hired and dispatched some 2,000 additional workers, most of them supplied by the military.

According to the Ministry of Land, Infrastructure and Transport, some 14,510 railroad and subway workers are on duty, which is 64.5 percent of the number of employees before the strike.

“The reformation of salary systems in Korea is a responsibility imbued by the National Assembly to the unions,” said Koh Young-sun, vice minister of employment and labor. “With their strike, the unions are basically making a statement that they will not be following the law.”

The last time the public railroad and subway companies held a joint strike was 22 years ago. The longest strike members of the Korean Railway Workers’ Union have held was in 2013, when they went on strike for 23 days against the privatization of operations of the KTX line from Suseo, southern Seoul, to the southern parts of the country.

Union members have announced they will be on strike “as long as it takes,” inciting criticism that a prolonged strike may lead to accidents. In 2013, a woman in her 80s died when a subway door closed on her foot as she was getting out, and the subway dragged her until she hit her head against a platform door.

The operator of the subway doors at the time of the accident was a college student hurriedly placed on the job due to lack of workers during the strike.