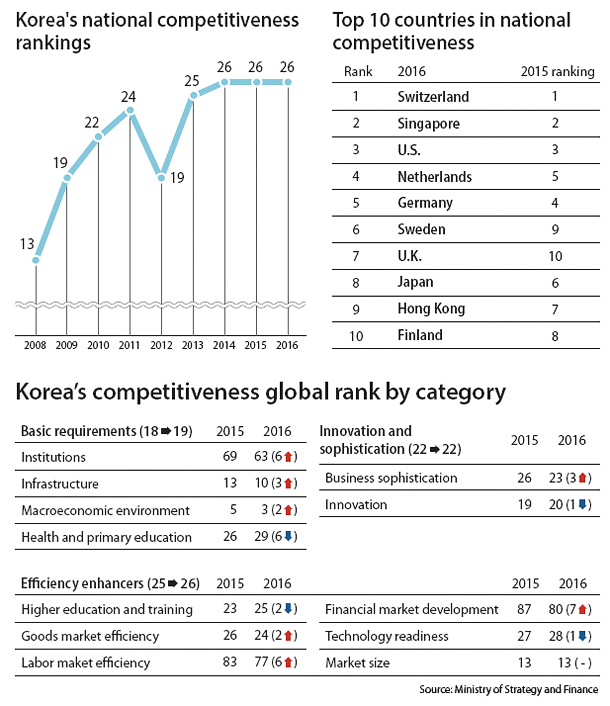 Korea’s competitiveness remained unchanged for the third straight year, ranking 26 on a global index of the world’s economies. However, more worrying was that Korea’s place in education and business innovation fell, raising concerns about the country’s growth.

The country placed behind Malaysia (25) this year on the World Economic Forum’s Global Competitive Index. The organization’s annual rankings were released on Tuesday.

“Reflected in the evolution of the GCI score since the 2007-2008 edition, the overall competitiveness trends for the region are overwhelmingly positive: 13 of the region’s 15 economies covered since 2007 achieve a higher score today, with Cambodia, China, and the Philippines posting the largest gains,” the report stated. “The only exceptions are Korea and Thailand, though for the latter the loss has been small and from a high base.”

In fact, Korea’s competitiveness in basic requirements and efficiency enhancers all declined.

The report stressed the need for Korea to improve its innovation capacity. Primary education fell six places to 29 and higher education and training fell two points to place 25.

A drop in the education system is a concern, especially as global competition has intensified recently. The organization’s report noted the need for more vocational training and secondary education to equip people to work in complex, digital environments.

In the innovation and sophistication category, Korea remained unchanged at 22. However, this was largely because business sophistication improved while the private sector’s innovation ranking moved down one place to 20.

“The region’s advanced economies need to further develop their innovation capacity. Japan and Singapore are the only economies in the region among the world’s top 10 innovators, ranking respectively eighth and ninth in the innovation pillar. Japan, Korea (which has dropped from eighth to 20th in the pillar since 2007), and to a lesser extent Chinese Taipei (11th), have experienced a steady erosion of their innovation edge since 2007,” the report noted.

Japan and Korea, which both ranked 20th in overall innovation, scored high on patenting and research and development investment. The East Asian economies have reached their limits when it comes to innovation ecosystem largely because of the excessive regulation and “conservative social norms around entrepreneurial risk,” the report noted.

There were areas where Korea improved. Labor market efficiency saw its competitiveness increase six ranks to 77 this year and financial market development moved up from 87 last year to 80, thanks to government-initiated financial overhauls.

“Korea’s competitiveness rank will be able to go up if we secure the common traits of the top ranking countries like more efficient labor market and innovation capacity through bold and swift reforms,” said a Finance Ministry official.