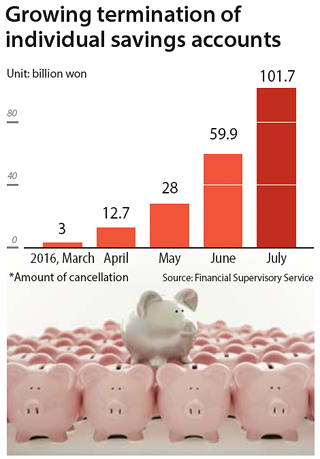 The government touted a new individual savings account (ISA) in March as an efficient tool to manage assets, but a growing number of customers are taking their money out due to low returns.

Customers withdrew more than 100 billion won ($91.3 million) from ISAs between March and July, Rep. Park Yong-jin of the Minjoo Party said on Wednesday. As of July, 75,000 customers had canceled their accounts.

Park, who sits on the National Policy Committee, acquired the data from the Financial Supervisory Service.

Introduced in March, the ISA is a platform that allows customers to manage investments in multiple financial accounts including savings accounts, mutual funds, stocks and even derivative-linked securities, based on the investment goals of the account holder. Under the platform, banks are allowed to manage investors’ funds in the same way as securities.

No tax, or very little, is imposed on interest. The Financial Services Commission promoted the program, plugging its tax exemptions.

Of the 34 products managed by the four banks, 12 have had negative returns. All entrusted offerings by KB Kookmin, Shinhan and IBK posted returns of less than one percent.

“The government belatedly approved sales of entrusted financial products by banks, so they had less time to hire professionals and build expertise,” Park said.

“The banks should be focused on tapping experts and improving competitiveness instead of trying to increase the number of subscribers.”