Cost of living drives more people out of Seoul

Cost of living drives more people out of Seoul 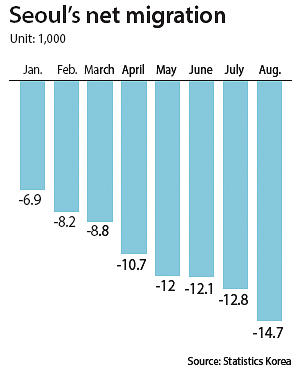 More people are leaving Seoul due to high housing prices while the number of newborns is likely to reach an all-time low this year.

Seoul saw its population drop by 14,671 last month, according to the government’s resident registration data released on Wednesday, while more people moved into neighboring Gyeonggi and Sejong, where a large number of civil servants reside.

Seoul has experienced net outward migration for more than seven years, according to a report by Statistics Korea released on Wednesday.

In August, the average purchase price for a residence in Seoul rose 3.34 percent year-on-year and the price for jeonse, or a lump-sum deposit, increased by 4.24 percent, according to KB Kookmin Bank’s monthly report released earlier this month.

The national average residence price, on the other hand, was 300 million won, while that of jeonse was 204 million won, the report said.

Busan came in second with net outward migration of 1,531 in August compared to the month before, while North Gyeongsang came in third with 928 people moving out.

As people left Seoul, the number of people moving into neighboring Gyeonggi grew. The net inflow of people in Gyeonggi was 15,118, with a total of 182,540 people relocating to the province and 167,422 moving out.

Sejong and South Chungcheong came in second and third for net inflows in August.

A total of 642,000 Koreans relocated last month, an increase of 3.7 percent compared to the previous year. In fact, the government has said the number of people relocating has dropped continuously due to the weak economy. But the data showed that the year-on-year rate rose for the first time this year in August as the housing market started to recover.

According to the Ministry of Land, Infrastructure and Transport, housing sales transactions made last month hit 98,130 in the country, the second highest rate for the month since 2006. There were 125,228 rent and jeonse transactions last month, the highest since 2011.

Meanwhile, another report released by Statistics Korea on Wednesday showed that fewer Koreans are getting married and having babies.

According to the data, there were a total of 33,900 babies born in July, down 7.4 percent from the previous year. In fact, Sejong was the only place in Korea’s 17 major provinces and cities that saw the figure grow compared to last year.

“Sejong’s housing market is growing very fast and the data showed that a lot of young Koreans, including civil servants, are moving into the city,” Lee said.

“There are more young people in Sejong compared to the past and this is making the marriage and fertility rate grow in the city.”

While Sejong bucks the trend, a total of 249,200 babies were born nationwide this year up to July and the statistics agency said the figure is likely to dip below the all-time low recorded in 2005.

“There is a high chance of hitting the all-time low since 1970, which is when the government started to compile the data in its current form.”

The number of people getting married dropped 10.2 percent during the same period.

There were a total of 21,200 couples that married in July and the marriage rate fell in 11 major cities and provinces, including Seoul, Busan and Daegu.

The number of marriages recorded 165,100 during the first seven months of the year and dropped 8 percent compared to the previous year.

The statistics agency has said the number is the lowest it has been since 2000, when the government started to compile the data in its current form, and it expected the number to fall below 300,000 for the first time in its history.

Meanwhile, divorce cases in July totaled 8,700, down 8.4 percent from a year earlier.

The number of Koreans who passed away last month totaled 22,100, up 2.8 percent compared to the previous year.

The statistics agency said Korean society is aging faster and that this is causing the figure to grow compared to the past.