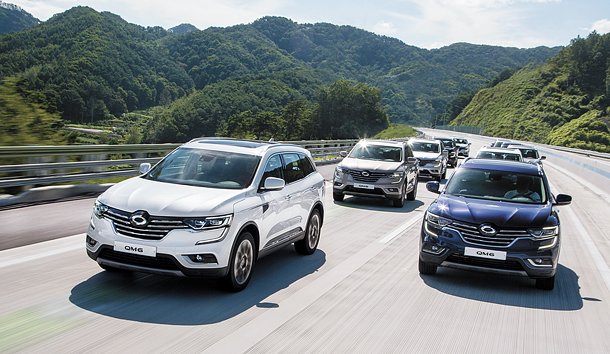 Renault Samsung Motors’ QM6 is one of few models that car enthusiasts in Korea have to look forward to for the remainder of the year.

The 2-liter diesel SUV comes six months after the so-far hugely successful SM6 sedan, and the synergy between the two new models could help the carmaker reclaim its past glory as No. 3 in the country after Hyundai Motor and Kia Motors.

It is a plausible scenario, considering the popularity of the midsize SUV since it was first unveiled at the 2016 Beijing Motor Show earlier this year. Renault Samsung said more than 10,000 preorders for the vehicle, which comes nine years after its predecessor QM5, have been placed in the past month - an impressive performance when put in context with the small automaker’s initial monthly sales goal of 5,000 units.

It would not be too farfetched to say that the QM6 is a fluffed-up version of the SM6, given the similarities between their design, from the sleek and dynamic exterior to sophisticated interior features. To take advantage of the general perception that the higher the serial number is, the better the model, Renault Samsung opted for the strategy of upgrading the model names to SM6 and QM6, even though they are just follow-ups to the SM5 and QM5. 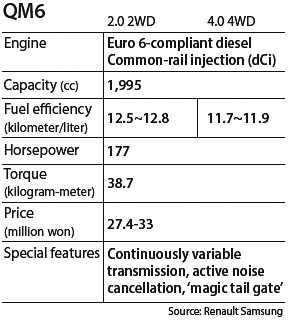 Renault Samsung hosted a QM6 test drive event for the local media on Sept. 22 in Jecheon, North Chungcheong. The automaker offered a four-wheel drive RE Signature, a top-notch trim among the eight available.

The test drive was a 108-kilometer (67-mile), two-hour trip through the East Chungju interchange, South Jecheon interchange and along local road No. 82. The highways allow drivers to test ride stability and driving efficiency, while the small roads curving through hills overlooking the scenic Cheongpung Lake let the driver gauge handling quality.

The car sped up to between 130 and 160 kilometers per hour quite steadily. But the SUV did not appear to show off as much instant power and torque as expected when accelerating from zero, despite being equipped with a powerful diesel Common-rail direct injection engine.

The trip was smooth and comfortable throughout the two hours. For this reporter, who drives a quiet gasoline sedan, diesel SUVs used to come as an annoyingly noisy hassle. But the active noise canceling, a feature that has normally been embedded in upscale models, meant the vehicle might as well have been a gas sedan.

The QM6 wasn’t too excellent in absorbing the impact from passing speed bumps. Even the most careful driver won’t able to help but swing from side to side in the face of bumps.

Another impressive element of the new SUV is its stereo system, probably the best in any locally-made car. A total of 12 Bose speakers meticulously placed within the interior provide an ample supply of bass and sophisticated sound.

The sound system, navigation and many in-car controls can be accessed on a vertical 8.7-inch tablet-style touchscreen on the center console, about half the size of a Tesla’s display. It’s an element that may appeal to the younger generation, which is relatively more accustomed to touchscreens. Renault Samsung has been smart to take the lead in introducing the feature that is seen to become a more common element in many mass-market vehicles in the near future.

The rear part of the automobile is installed with a sensor underneath that automatically opens the trunk with the swing of a foot and adds to the vehicle’s charm.

The model, according to Renault Samsung, is set to compete against existing SUV models such as Hyundai’s Santa Fe and Kia’s Sorento. Size-wise, the QM6 is narrower than the Santa Fe by 37 millimeters (1.5 inches) and the Sorento by 42 millimeters, a negligible difference.

In addition, Renault Samsung proudly promotes the fact that the price difference between the two-wheel drive and four-wheel drive model, considered safer and more driveable, is only 1.7 million won ($1,550), a competitive edge in comparison to the average 2.1 million won gap in rival SUV lineups.

The QM6 will be manufactured in Busan and exported to 80 countries under a different name, the Renault Koleos. China, though, will manufacture the Koleos at its Renault-Nissan Chinese factory.