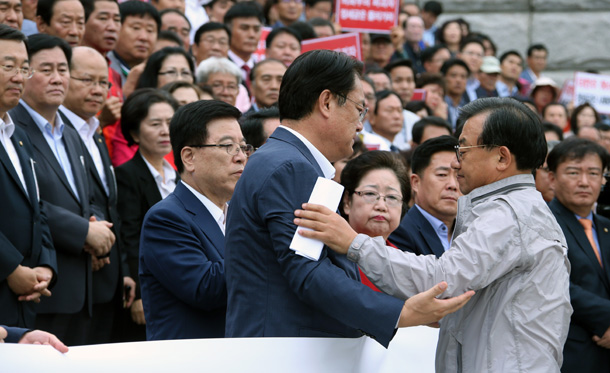 Lee Jung-hyun, chairman of the Saenuri Party, announces Wednesday that the ruling party will end the unprecedented boycott of the legislature’s audit of the government, while Lee will continue his hunger strike to challenge the political integrity of the National Assembly speaker. [PARK JONG-KEUN]

Defying their chairman’s order, lawmakers of the ruling party decided Wednesday to continue their boycott of the legislature’s audit of the government and join their leader’s hunger strike to challenge the integrity of the National Assembly speaker.

The Saenuri Party held a general assembly meeting of its lawmakers in the evening to discuss the deadlock in the National Assembly. The 20-day National Assembly audit of the government and public offices started on Monday, but the Saenuri Party boycotted the sessions to protest the opposition parties’ passage on Saturday of a resolution to demand the dismissal of the new agricultural minister.

Its chairman, Lee Jung-hyun, also started a hunger strike on Monday to demand the resignation of National Assembly Speaker Chung Sye-kyun for having arranged the vote only participated in by the opposition. President Park Geun-hye said she will veto the resolution and keep Agriculture Minister Kim Jae-soo, but she has made no public comment on the ruling party’s boycott of the audit.

Earlier on Wednesday, speculation grew that the ruling party would go back to the National Assembly after Lee ordered them to end the boycott. “Our lawmakers should participate in the audit starting tomorrow,” Lee said in a party rally to demand Chung’s resignation. “It is my belief, and the Saenuri lawmakers’ belief, that we must work for the country under all circumstances.”

Lee said he will continue his hunger strike until Chung steps down. “The speaker should mediate two sides for political harmony, but he sided with a particular opposition party,” Lee said. “I’ll make him resign.”

Later in the day, the party held a meeting of its lawmakers to discuss Lee’s order. The lawmakers, however, decided to continue the boycott. “We will hold the speaker accountable, and we won’t participate in the audit tomorrow,” Rep. Chung Jin-suk, floor leader of the Saenuri Party, told the reporters after the meeting.

“I understand Lee’s sincere and loyal advice, but most of the lawmakers said they cannot end the boycott,” Chung said.

Rep. Min Kyung-wook, spokesman of the party, also said the lawmakers will take turn to join Lee’s hunger strike. “Most of the lawmakers said they cannot end the boycott while Lee is continuing his protest,” Min said.

The Saenuri Party also said it will ask the prosecution on Thursday to investigate Speaker Chung on charges of defamation and disseminating false information. The party said Chung’s earlier comment that he had consulted with the party before allowing the vote is a lie and that he defamed its lawmakers’ honor. The party also said it will ask the Constitutional Court to rule on Chung’s alleged violation of the Saenuri lawmakers’ right by omitting a discussion with them on the voting schedule.

Chung, a sixth-term lawmaker of the Minjoo Party, gave up his party affiliation after he was appointed as speaker in order to ensure political neutrality. But the ruling party questioned his integrity, citing a recording of his conversation with a Minjoo lawmaker before the controversial vote about possible political bargaining.

Lee appeared to be forced to end the boycott of the legislative activities as some Saenuri lawmakers made clear their intention to participate in the audit. Since Monday, no sessions took place at the committees chaired by the Saenuri lawmakers, but opposition lawmakers questioned government officials at some committees that they chair.

A crack in the ruling party’s audit was first seen on Tuesday when Rep. Kim Young-woo, chairman of the National Defense Committee, said he wants to host an audit on the Joint Chiefs of Staff as scheduled. Kim informed Saenuri lawmakers that he would open the session Tuesday afternoon, stressing that the defense committee must hold the audit to best prepare the country for snowballing the North Korean threats.

Some Saenuri lawmakers rushed to Kim’s office to stop him. They physically blocked him from leaving the office for nearly three hours, and the audit was canceled.

On Wednesday, another Saenuri lawmaker declared his intention to hold an audit. Rep. Cho Kyoung-tae, who chairs the Strategy and Finance Committee, invited the chief negotiators of the Saenuri, Minjoo and People’s parties to his office to discuss the audit schedule. The negotiation, however, ended without any progress.

Rep. Yoo Seong-min, a key adversary of Park and her loyalists, also said Wednesday that the Saenuri leadership must make a bold decision to end its boycott, although the speaker clearly erred by allowing the vote. He made the proposal at a meeting of senior Saenuri lawmakers earlier in the day.

“Some lawmakers also said they want to participate in the audit, while Lee’s hunger strike to protest the speaker should continue,” he said. “But they were the minority, and most of them remained stubborn.”

And the war of pride between Lee and Chung will continue, as Chung dismissed Lee’s call for resignation.

“In operating the National Assembly, my counterparts are the three floor leaders [of the Saenuri Party, Minjoo Party of Korea and People’s Party],” Chung said in a discussion with the foreign press on Wednesday. “Party chairmen are members of the National Assembly, so I respect them and I can also talk to them if necessary, but my counterparts are the floor leaders.”

He also dismissed the challenge to his political neutrality, saying he committed no violation of the Constitution and the National Assembly Act while performing his duty.

In addition, he said he has no intention of apologizing for having arranged the vote. “I did put enormous efforts to prevent the resolution from being submitted to the legislature,” he said. “I wanted the ruling and opposition leaders to resolve this issue wisely, but the resolution was tabled. Once it was tabled, the speaker is responsible for processing it.”