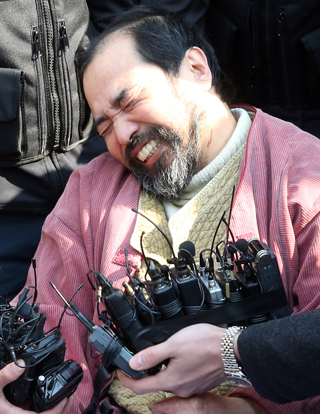 The Korean man who attacked U.S. Ambassador Mark Lippert with a knife last year was sentenced to 12 years in prison for attempted murder by the Supreme Court on Wednesday.

The top court convicted 56-year-old Kim Ki-jong, who slashed the ambassador with a knife during a forum in Seoul on March 5, 2015, for attempted murder, assaulting a foreign envoy and obstruction of duty.

“It is appropriate to uphold the lower court ruling that though it was not completed, he had the intention to murder,” the court said, “taking into consideration the details of the crime and his motive, weapon of choice, the size of the knife and usage, magnitude of the attack, as well as the area attacked and its repetitiveness.”

Kim, a radical activist, slashed Lippert in the face and arm at a breakfast forum at the Sejong Center for Performing Arts in Seoul. He was immediately arrested.

The ambassador required two surgeries and 80 stitches to his face that resulted in a five-day hospital stay.

Kim, who is the founder of Woori Madang, a unification research group, initially testified that he attacked Lippert because he is opposed to the ongoing joint military drills between Washington and Seoul.

Prosecutors determined that Kim intended to kill Lippert based on the location of the top envoy’s injuries and Kim’s use of a 24-centimeter (9-inch) knife.

In May, Kim further attacked a prison guard as he was imprisoned in a detention center in Seoul. He demanded a new patient gown, then hit the guard in the face and torso.

Lower courts also had previously convicted Kim of attempted murder and sentenced him to 12 years, but Kim was not found guilty of violating the National Security Act, as suggested by the prosecution, because his views on North Korea did not necessarily make him a person who engages in anti-national activities, a ruling also upheld by the highest court.

“Kim, in order to widely publicize his views on wanting to halt the South Korea-U.S. military drills, committed a very serious crime by targeting the U.S. ambassador and attacking him with a knife,” said the court in the ruling.

“He shows no sign of repentance for his crimes.”