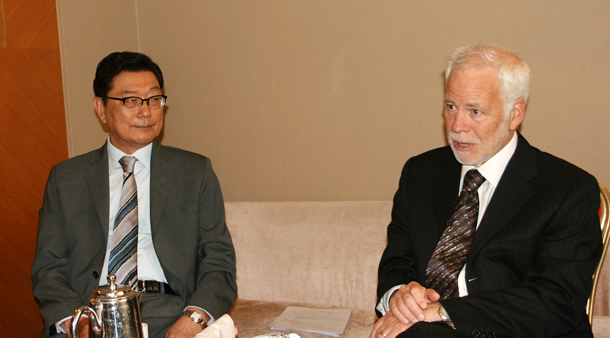 Addressing Korea’s present economic concerns, Barry Eichengreen, a professor of economics and political science at the University of California, Berkeley, argued that the country has the ability to solve its household debt problem through fiscal policy and that the U.S. Federal Reserve’s possible rate hike later this year will have limited impacts on the Korean economy.

The economist and author of the 2011 book “Exorbitant Privilege” sat down with Chung Duck-koo, a former Korean commerce minister and current chairman of the North East Asia Research Foundation, for an interview during a conference held last week in Beijing. The two have co-written three books in the past on East Asia’s economic cooperation issues.

Chung asked Eichengreen questions about Korea’s economic future, the U.S. presidential election and the rising tide of protectionism. Below are edited excerpts from the interview.

Q. Emerging-market countries have unforgettable memories from the 1990s and from 2008 in the wake of the big U.S. interest rate hike in 2004. The American economy is gaining confidence again, but the Federal Reserve is slow to raise rates. What do you think about the situation right now?

A. In Asia, in 1994-95, these things happened, and that informs how people see the policies now. I certainly agree with that, and I wrote a book about it called “Hall of Mirrors” in 2015 that was all about historical experience shaping ways of how policymakers and society think about their current problems. They think about them through the lens and windows of their own historical experience that history informs, but that also distorts how they think about the present. So I agree that it is true that people in Asia worry a lot about the disruptive impact of the Federal Reserve’s rate increase because those rate increases have been disruptive in their impact on Asia in the past.

So maybe we should go more slowly and maybe more cautious. We saw that in 2015, and that is why the Fed paused and didn’t raise the rate more than once - because they were worried about spillover to emerging markets and the spill back to the United States. That is a reason to be a little bit more hopeful that history will not repeat itself.

This time is different from the 1990s and 2008. But now we are wondering how long this kind of stagnation and long-term recession in the world economy will last.

Emerging economies, especially China, are very fragile. If the long-term recession continues for 10 to 15 years, the Chinese economy, along with Russia and Brazil and energy-exporting countries, might be totally devastated. These will spill back into the U.S. and world economy. That is why unilateral policy and actions by a single country do not help much in the world economy.

Many people around the world worry about world economic leadership for collective action. The G-7 and G-20, they do not have any specific actions or plans for helping the world economy recover.

So you raised three concerns. Number one is how long will the current stagnation or slow growth continue; number two, is there hope for policy coordination to address that problem; and number three, what is going to happen to China.

So number one, it depends on policy. If we continue on current policies, it will last a long time. There are things that can be done. I think the current stagnation reflects political noise and uncertainties. We have Mr. Trump in the United States, we have the impeachment process in Brazil, we have elections coming in Europe, we have a coup attempt in Turkey. Lots of political noise affects investors. A more stable political environment, if it were to happen, would be good for economic growth, ending the stagnation.

On the issue of policy coordination, I agree with the principle that no one country is a locomotive big enough to pull the whole world economy behind it by itself. Countries need to work together in order to get the global economy going. But I am pessimistic about the prospects of it happening. This is much too political to get easy cooperation. You get cooperation when countries are all allies and all politically on the same page.

Right now, we have deep division between the U.S. and China, and in other groupings as well. President Trump’s cooperation would be impossible; with President Clinton, it will be difficult because there is no agreement on the nature of the problem. These issues are not technical, and there are deep divisions between major economies.

Nobody knows what will happen in China because we have never seen such a big economy grow so fast for an extended period, and now it has slowed down. There is a similarity between China now and Korea in the 1990s, but there are also big differences as well. My own guess is that China still has enough to control its economy and what happens. Their goal is to get the economic growth rate to decelerate very gradually. It can grow by 6 percent and 5.5 percent for the next year or so. I think they have the policy instruments to do that.

Korea now has a very serious problem with household debt. It is very difficult to handle monetary policy right now. As the U.S. Fed continuously increases its rate, what should the Bank of Korea do?

The good news is that the Fed will raise the rate very slowly so the Bank of Korea will feel only a little bit of the pressure. Korea is another good example of a country where monetary policy cannot be relied on to solve all its problems.

Korea is also a country with fiscal space where the debt problem is a household problem and to a lesser extent a corporate debt or government debt problem. Spending has been depressed due to household debt, and the government can step up temporarily with public spending.

If something needs to be done to support the economy, it should come from the government and fiscal side, in my view, not from the Bank of Korea or monetary side.

How do you feel about raised concerns surrounding protectionism?

I think whenever the world economy slows, protectionism pressure grows, and we have seen that in the U.S. tariffs on Chinese steel exports and other examples. I think we have now entered a period where global trade will no longer grow faster than global GDP. It has grown faster than GDP for several decades, but it is growing slowly. I think they will grow at a similar rate, which means that an export-led growth strategy will become a little bit harder than it was in the past. And Korean shipping companies will have to follow more conservative investment strategies than they did in the past.

Many people have been very curious about the heart of a businessman like Donald Trump. He has made very critical comments, but the American people are supportive of Trump.

The main reason may be the long-term recession of the economy, income disparity and the existing leadership not making a good performance in dealing with these issues. Even Hillary Clinton’s victory can’t disregard that kind of domestic American sentiment.

That is right. Trump’s victory in the Republican primary reflects a combination of two things.

Number one is the well-known anger and alienation of the Republican voters who have been left behind, who have not benefited from globalization and technological change, who feel like they haven’t seen income growth. Something they blame first is China; second is technology, saying that robots took their jobs away; and third is government, which has done nothing to adjust.

A second factor has been the failure of the Republican leadership to address their concerns. The Republican leadership is an echo chamber where they think low taxes and business-friendly policies will not only help businesses but also unemployed coal miners in West Virginia. The reality is that you have to address unemployed coal miners in West Virginia and automobile industry workers in Detroit by helping them with training programs and education and infrastructure to bring businesses to Detroit rather than simply cutting taxes for the wealthy.

The Republican Party did not address the concerns of working-class voters who are socially conservative and voted for Republicans. But Trump did. There was a big sense of alienation and anger among white working-class socially conservative Republican voters. Government is the problem, they say, and Trump comes along echoing them. We haven’t seen such a thing maybe since 1896, when William Jennings Bryan, a populist, won the Democratic nomination and almost won the election.

I would like to talk about Japan’s Abenomics. I think Prime Minister Shinzo Abe saw great success in helping people’s sentiment at the first step.

But he failed to proceed with the next arrows because he is a politician, not an economic planner. Politicians do not want to make big problems, and many observers in Korea believe the plan will fail due to Japanese political structures. What do you think about this?

I see remarkable similarities between Franklin Roosevelt in 1933 and Prime Minister Abe in 2013. Both have inherited a depressed economy, and both of them started by trying to use their personalities to restore confidence. Roosevelt made a popular speech about how you have nothing to fear but fear itself. He used his rhetoric to help raise consumer spending.

The big difference, I think, was the structural reform. Roosevelt made a lot of structural reforms under the New Deal that helped the economy get going. Abe has not been able to do that. Roosevelt had a heavily Democratic House and Senate, which made him able to push through, whereas Abe found it more difficult.