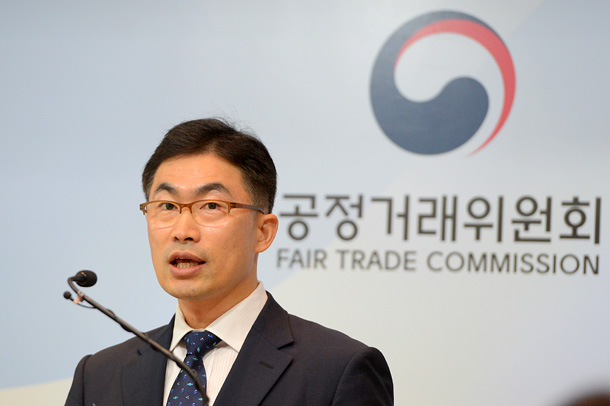 Chung Chang-wook, an official from the Fair Trade Commission, holds a press briefing on alleged unfair business practices between CJ CGV and JS Communications at the antitrust agency’s headquarters in Sejong on Thursday. [NEWSIS]

The Fair Trade Commission has decided to fine multiplex giant CJ CGV 7.2 billion won ($6.6 million) and refer the company to prosecutors for investigation on antitrust violations.

According to the antitrust commission, CJ CGV canceled contracts with independent screen advertising agencies that were providing its theaters with ads and commissioned all the work to JS Communications when the company was founded in July 2005.

CJ CGV is said to have given more favorable conditions to JS Communications, offering a commission rate that was 25 percent higher than that given to previous contractors.

As a result, JS Communications made unfair profit amounting to 10.2 billion won between 2005 and 2011, the government agency said. During this period, the company’s average profit rate was 50.14 percent, six times the market average of 8.52 percent.

“Because of the unfair business practices, JS Communications rose to hold the largest market share in the movie screen advertisement market,” said Chung Chang-wook, head of the Fair Trade Commission’s service industry department. “Pushing out previous contractors has resulted in reducing the business territory of small and midsize enterprises.”

Whether this charge from the antitrust agency will directly lead to penalties for the Lee brothers is uncertain. The law punishing the families of conglomerates for profiting excessively from lucrative business contracts given to other members went into effect in 2015 and therefore does not apply to the CJ CGV and JS Communications contracts from 2005 to 2011.

The Fair Trade Commission also said they did not find any evidence that Lee Jay-hyun made any direct orders or was personally involved in nepotism with JS Communications.