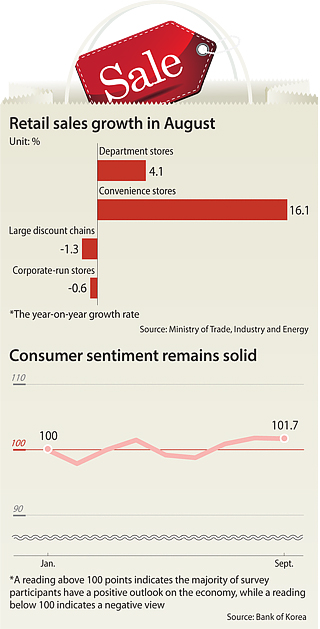 Korean retailers saw a sales jump last month, largely thanks to an abnormally long and pronounced heat wave and early purchases of gifts ahead of the Chuseok harvest holiday, August figures show.

According to a report released Thursday by the Ministry of Trade, Industry and Energy, retail sales grew 9.1 percent in August compared to last year. Although this is a slight drop from July’s 10.8 percent figure, the retail industry has consistently seen around 9 to 10 percent annual growth each month.

Among brick-and-mortar retailers, convenience stores saw the sharpest growth (16.1 percent), followed by department stores (4.1 percent). Department stores benefited from a 14.5 percent increase in the number of people purchasing food products, such as gift sets for Chuseok.

Convenience store sales went up following two trends in the market. The number of newly opened convenience stores increased 13 percent from 25,478 last year to 28,794 in August. The stores also experienced a surge in sales of instant food products as the number of people living alone continues to grow.

“This year’s Chuseok came earlier than the previous year, and it led to more people shopping in August,” said Chung Jong-young, a director at the Ministry of Trade, Industry and Energy. “The data showed that the demand for home appliances for summer use and gifts for the holiday rose compared to the previous year.”

Food and beverage sales went up 2 percent largely because of Chuseok preparations. The holiday came in mid-September this year, about two weeks earlier than last year.

Major discount stores such as E-Mart and Lotte Mart also saw sales drop 1.3 percent. The ministry said it was largely because there were two fewer holiday days this August. If not for the fewer vacation days, sales at discount stores would have remained unchanged or slightly increased.

The ministry is optimistic about retail figures for September, given this month’s weeklong Chuseok holiday, which ran from Sept. 14-18, and the government’s annual fall sale that began Thursday.

Several factors, though, may curb the current course. Growing tension on the peninsula caused by North Korea’s recent nuclear test and large-scale strikes in several of the nation’s industries as well as restructuring of the shipping and shipbuilding industries have all weakened consumer confidence.

The composite consumer sentiment index for this month dropped for the first time in three months.

“Koreans are becoming more pessimistic about the economic situation due to ongoing corporate restructuring and growing uncertainties coming from North Korea’s nuclear tests and the possible interest rate hike in the United States,” said Chang Byung-hoon, a researcher at the Bank of Korea.

The index figure fell 0.1 point from 101.8 in August to 101.7 this month. A reading above 100 points indicates the majority of survey participants have a positive outlook on the economy, while a reading below 100 indicates a negative view.

The consumer confidence report released Thursday comes as labor unions in the financial, health, public transport and automotive industries are striking in protest of a government initiative to expand its performance-based salary system. The unions argue the measure would make it easier for managers to fire workers.

Despite the government’s warning, more unions are expected to join.

The walkout by Hyundai Motor’s labor union, its first all-out strike in 12 years, is projected to cost the automaker 3 trillion won ($2.73 billion) in losses.