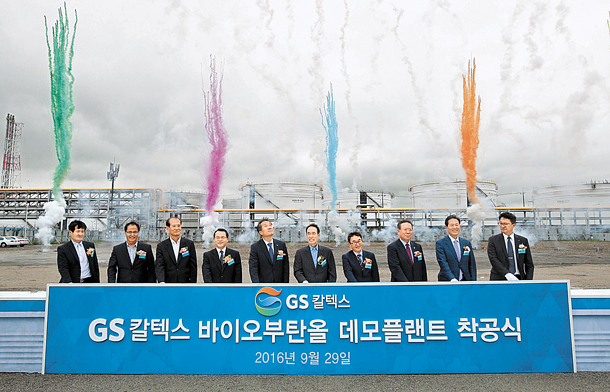 GS Caltex, one of the nation’s leading oil refiners, broke ground on a biobutanol manufacturing plant in Yeosu, South Jeolla, on Thursday. The company said the plant would be the world’s first set to produce biobutanol from inedible biomass such as waste wood and grains.

The plant, which is a demo site to test the feasibility of mass producing biobutanol from biomass waste, will play a key role in the company’s growth. GS Caltex invested 50 billion won ($45.43 million) to finish the plant by late 2017 and produce 400 tons of biobutanol annually.

Sales of oil products are heavily affected by volatile economic conditions. In search of more stable sources of profit, the company set biochemicals as a focus for growth and started research and development a decade ago. GS Caltex owns more than 40 patented technologies related to mass producing biobutanol.

The chemical, used in coating agents, paints, adhesives and also as automobile fuels when mixed with gasoline, is an environmentally-friendlier alternative to butanol from fossil. While it is usually manufactured from edible biomass such as corn, GS Caltex went a step further to lower production costs by producing biobutanol out of inedible biomass.

“By developing unique and competitive technology to produce [biobutanol], we plan to commercialize the product in the world market,” a spokesperson said.

The company also plans to partner with Jeonnam Center for Creative Economy and Innovation to foster biobutanol in the region.

“We will actively contribute to establishing a healthy ecosystem for the region’s biochemical industry by supporting start-ups and small- and medium-size enterprises that produce various applied products to biobutanol,” a company statement said.