A social outcast’s fight to survive

A social outcast’s fight to survive 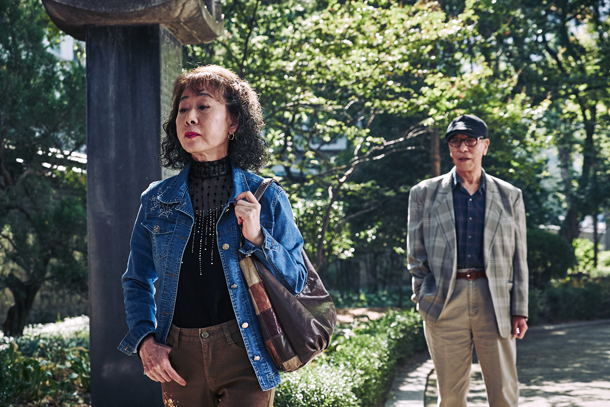 In the upcoming “The Bacchus Lady,” Yoon Yeo-jeong, who plays a 65-year-old prostitute named So-yeong, leads a customer interested in her “service.” So-yeong keeps herself looking young with heavy make-up and a youthful fashion sense. [CGV ARTHOUSE]

For those who have never imagined facing death, CGV Arthouse’s upcoming “The Bacchus Lady,” helmed by E J-Yong and starring veteran actress Yoon Yeo-jeong and singer-turned-actor Yoon Kye-sang, shows how miserable and painful aging can be for older people, especially those without close family and a means to make money.

“The subject [of death] is like a taboo,” said the actress at the press preview held at Wangsimni CGV, eastern Seoul, on Monday. “I hope that the movie will bring up social issues such as the poverty and aging that the elderly face.”

E added, “Even though the film starts off with an old lady’s prostitution, its main topics are aging and death. People these days live up to 100-years-old, but we can’t say for certain whether that is a blessing or a catastrophe. Although I believe the theme may be a little too late to bring up, I hoped to discuss [with audience] how to live a naturally happy life.” 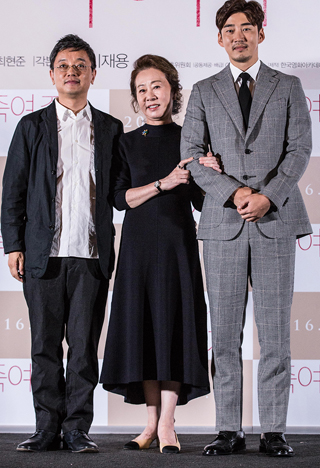 The film centers on 65-year-old So-yeong (Yoon) who barely makes ends meet through prostitution. Every morning she would head to Tapgol Park in Jongno District, central Seoul, where she would look for men willing to pay her for her services. Since she is known to be good at “serving customers,” sometimes old men come up to her. Most of the time, however, she approaches men and asks “would you like a bottle of Bacchus?,” which is symbolic amongst older people for paid sex.

Living such a life, it is not a surprise that the main character in the movie is suffering from venereal disease in her 60s. However, that pain doesn’t stop her from working continuously. Despite the indignity So-yeong experiences, all that she manages to make is 30,000 won ($27). And of that small amount, she pays 10,000 won for a motel room.

So-yeong’s fellow tenant Do-hun (Yoon Kye-sang), who relies on an artificial leg, and the pair’s landlady Tina, a transgender woman, are no better off as they are also social outcasts.

“I yearned to draw on the lives of social outcasts that bond together,” said E. “Although the three people’s lives may seem horrible and pitiful to some, the three still have to continue with their lives, relying on each other.”

Even though the veteran actress jumped at the opportunity to take part in the film due to her trust in the director, she also stressed that there were many times she regretted starring in the movie, especially while shooting sex scenes.

“Since E paid attention to even the slightest details, I had to shoot [sex] scenes several times. I felt extremely depressed while shooting and even after completing the film,” and added that she has never felt this overwhelmed by playing a character.

In addition to So-yeong’s difficult life, “The Bacchus Lady” also touches on the pain of aging through So-yeong, who later unwillingly becomes a killer that ends the lives of senior citizens suffering from physical disabilities and loneliness, upon their request.

Although some may claim that So-yeong’s deeds are morally inappropriate, the actress said that she was able to sympathize with the character.

“So-yeong lives with an alias, gave up her newborn for adoption [when she was younger] and now barely makes a living through prostitution. I believe the character has also thought about dying many times, and therefore, could understand why the old men wished to stop living.”

Even though the movie may sound a little dark, So-yeong’s warm-heartedness in helping others going through difficult situations is a bright spot that will endear viewers to the character throughout the movie.

The film will hit local theaters on Oct. 6, and is rated R.