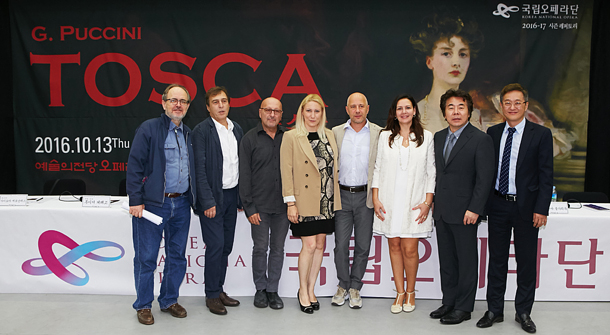 The Korea National Opera will kick off its 2016-17 seasonal repertoire with a new production of “Tosca,” a verismo-style Italian opera composed by Giacomo Puccini (1858-1924). This ambitious comeback marks 22 years since last staging of the production by the national opera in 1994.

The new show adds modern elements to the piece by setting the show in the 1930s, when World War II was brewing in Europe amid the fascist air, opposed to the original storyline which depicts the year 1800.

“I wanted to realize ‘Tosca’ from a different angle this time,” said Daniele Abbado, the stage director. “To create the stage, I referred to documentary movies about local people in the southern suburbs of Italy during the 1930s. The brutality within the storyline is also described in a more refined way.”

The costumes are designed like dresses and uniforms from the 1930s as well. 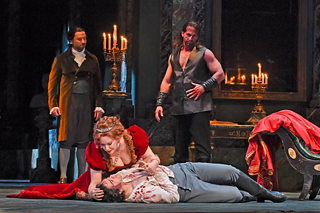 The staging of the Dallas Winspear Opera’s “Tosca” of the 2015-16 season is similar to what the Korea National Opera aims to realize this year. [KAREN ALMOND]

The piece follows a passionate love triangle between a woman and two men, holding within it the feelings of love and hatred. Barone Scarpia, the Roman chief of police, holds a strong desire for the beautiful Tosca, but shows it in the wrong way by trying to kill the man she loves.

Some view Scarpia’s obsession to win over Tosca’s heart as a mere mischief to fulfill his macho pride. But Baritone Ko Seng-hyoun, who will be taking the part of Scarpia, claimed he was able to capture the pure heart of the seemingly merciless man as he practiced for the performance.

“Many condemn Scarpia for his brutal acts to conquer his love,” said Ko at the press conference held on Sept. 22. “But I personally feel that Scarpia is Puccini’s most loved character.”

“Scarpia is a physically strong man. Would it have been impossible for him to stop Tosca’s arm from stabbing his heart? I personally believe that dying by the hands of Tosca was his way of showing his love towards the woman.”

Likewise to the coexistence of love and atrocity Scarpia shows, this year’s performance is themed on duality. Puccini colors “Tosca” with music and sentiments that hold contrasting feelings, which the team is hoping to display successfully to the audience.

The team also emphasizes duality through its set, with numerous sacred scenes portraying churches. Hence, the stage revolves around two extremes, from the gloomy and brutal atmosphere of the oppressed era to the divine air of the religious world.

“Like in Puccini’s other pieces, there are various musical colors lying beneath ‘Tosca,’” said Carlo Montanaro, who will conduct the performance. “Hence I feel it is my duty to express them to the fullest.”

“Instead of forcing the sounds out of the singers, I am trying to support them throughout the acts, so that their voices can be produced in their fullest beauty.”

Carlo Montanaro is an Italian conductor with 16 years of experience, having been acclaimed by Seen and Heard International, a website that reviews operas, ballets, and other live performances.

According to the site, “Montanaro’s leadership blends the voices on stage with surprisingly - sometimes even startlingly - zestful work in the orchestra pit in a way that makes Puccini’s score more intoxicatingly beautiful than any performance I can remember.”