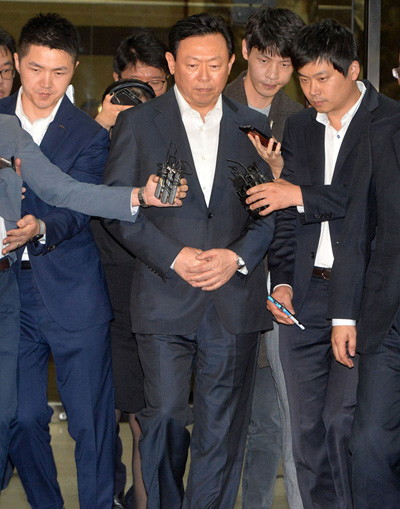 “It’s difficult to recognize the necessity and reasonableness of Shin’s pretrial detention,” the judge said in dismissing the request, “taking into consideration extenuating circumstances regarding the major charges and a lack of evidence against Shin.”

At the hearing, Shin’s lawyer detailed these extenuating circumstances, saying that most of the charges against his client concern events that took place while his father Shin Kyuk-ho, founder of the group, was in charge of the retail giant.

Shin was accused of embezzlement and corporate malpractice amounting to some 175 billion won ($160 million).

The 61-year-old chairman of Lotte Group is the highest-level executive to be investigated by the prosecution since it opened the probe about 100 days ago, marking the first time Lotte became the target of a large-scale prosecution probe since its founding in 1967.

But since the death of its vice chairman, Lee In-won, on the morning of his summons, prosecutors were keen to arrest Shin in order to secure more evidence against him.

The prosecution probe into the owner family of Lotte Group took off in June, and had thus far indicted Seo Mi-kyung, third wife of Lotte founder Shin Kyuk-ho, for evading taxes, indicted and detained Shin Kyuk-ho’s eldest daughter, Shin Young-ja, for embezzlement and bribery, and questioned Shin Kyuk-ho and Shin Dong-joo over their corruption charges.

Lotte Group, long concerned that Shin’s possible detention may result in a serious blow to the group’s business, appeared relieved at the news.

“We have escaped the worst,” said an employee of the group.

“Now that Chairman Shin will be standing trial without being detained,” said another employee, “he will be able to focus on managing the group.”