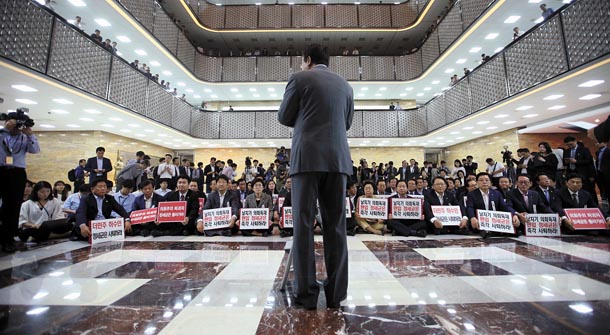 After challenging the National Assembly speaker’s integrity by boycotting an audit of the government, the ruling party’s united front ended on Thursday as one of its lawmakers halted the strike and hosted a session.

Saenuri Rep. Kim Young-woo, chairman of the National Defense Committee, opened an audit session in the morning, defying the ruling party’s decision to continue their boycott of legislative activities. The 20-day National Assembly audit of the government and public offices started on Monday, but all Saenuri lawmakers have boycotted the sessions to protest the opposition parties’ passage on Saturday of a resolution demanding the dismissal of the new agricultural minister. 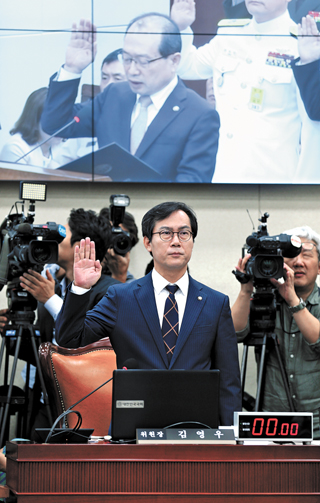 While operations were paralyzed at those committees, the National Defense Committee became the exception with Kim’s decision to open a session, although no Saenuri lawmakers on the committee attended it.

“Until now I have always said national defense is a bipartisan issue,” he said. “I have to take responsibility for what I said.”

Kim already made an attempt on Tuesday to end the boycott, but Saenuri lawmakers physically stopped him from leaving the office for three hours.

While the opposition parties expressed their appreciation to Kim, Rep. Kyeong Dae-soo, a Saenuri chief negotiator on the committee, said Kim’s actions will only fuel the confrontation between the ruling and opposition parties.

The Legislation and Judiciary Committee and the Science, ICT, Future Planning, Broadcasting and Communications Committee also held audit sessions on Thursday, although they were chaired by Saenuri lawmakers. As the ruling party continues the boycott, opposition lawmakers chaired the sessions, citing a clause in the law governing the legislature.

“If the committee has difficulties in its activities because the chairperson refuses or evades the opening of a meeting or progress of proceedings,” Clause 5 in the Article 50 of the National Assembly Act says, “or fails to designate a member to act for him/her, an executive secretary belonging to a negotiating party to which the chairperson does not belong shall act for the chairperson in the order of the executive secretaries belonging to the negotiating parties with the largest number of constituent National Assembly members.”

Earlier in the morning, Rep. Park Beom-kye of the main opposition Minjoo Party of Korea sent a request to Saenuri Rep. Kweon Seong-dong, chairman of the Legislation and Judiciary Committee, to open the session. After Kwon did not show up, Park declared the opening of the audit.

The session was open, but no actual questioning of government officials took place by opposition lawmakers at the committee on Thursday.

The Science, ICT, Future Planning, Broadcasting and Communications Committee also opened a session on Thursday and opposition lawmakers actually carried out its audit.

Minjoo Rep. Park Hong-geun acted as a chairman to start the session and the lawmakers questioned government officials with regard to the safety of nuclear plants near Gyeongju in the aftermath of the recent earthquakes.

He, however, refused to submit to the Saenuri Party’s demand to resign for having arranged the controversial vote to demand the agricultural minister’s dismissal.

The Saenuri Party asked the prosecution Thursday to investigate Chung for abuse of power and defaming ruling party lawmakers by claiming he had consulted with the party on the voting schedule in advance.