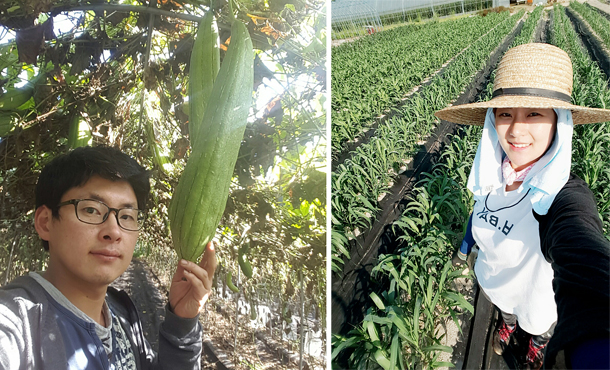 Yoo Seong-min, left, a 29-year-old farmer in Danyang County, North Chungcheong, shows a sponge gourd he grew on Tuesday. Song Ju-hee, right, a 28-year-old farmer in Hwacheon County, Gangwon, has been steadily updating consumers with photos and videos of how she grew sesame seeds, perilla seeds, corn and other crops on her social media accounts. [YOO SEONG-MIN, SONG JU-HEE]

“I posted on my Facebook page details on how I’ve grown the 4,000 corn stalks in my field,” said Song Ju-hee, a 28-year-old farmer in Hwacheon, Gangwon. “And I sold all the corn within three hours.”

In her field, Song grows perilla seeds, sesame seeds, corn and other crops, letting buyers browse through photos and information on how the crops were grown and harvested.

“Most of the orders for my produce are placed on these websites,” she added. “People who buy my crops often tell me it’s good to see a young person into farming.”

This was a life Song could hardly have pictured living before she left Seoul in December 2013, giving up her preparation for the civil service exam and returning to her hometown of Hwacheon, Gangwon, to begin a new life as a farmer.

And Song is just one of many returning to the countryside, a newfound opportunity for many budding farmers.

Yoo Seong-min, a 29-year-old farmer in Danyang County, North Chungcheong, has been farming for the past three years.

Social media is also Yoo’s main platform of communication with his customers.

“I grow and sell groundsels, sponge gourds, balsam apples and more, which can easily be found in supermarkets,” Yoo said. “But many customers are curious where and how the crops are grown. So I write a farming diary everyday on my blog, and post photos and videos about my field and the crops I’m growing on my Facebook page, and I think this helps more customers to trust me and my products more.”

His customers number some 1,500 on Kakao Talk and around 300 on Facebook. Selling 80 percent of his crops via social media platforms, and 20 percent via retailers, Yoo’s sales totaled 120 million won last year.

More people in their 20s and 30s are returning to the countryside to take up farming, as finding a job in the city is becoming increasingly difficult.

In fact, as of the end of last year, 1,168 people in their 30s or under have moved to countryside to start farming, according to the Ministry of Agriculture, Food and Rural Affairs, and in 2011 alone, some 400 young adults became farmers.

“Younger people are choosing to become farmers in the countryside because the state of high unemployment is likely to continue for a while,” said Kim Jeong-seop, a researcher at Korea Rural Economic Institute.

According to Statistics Korea figures released last week, the number of Koreans who have been unemployed for more than six months rose 51.7 percent year on year, or from 62,000 to 182,000 last month.

But the increasing numbers of young farmers who are adept at social media are bringing about a change in the way other farmers are doing business, too.

Hwacheon Agricultural Technology and Extension Center began to provide farmers with one-day lectures on social media marketing. On Sept. 7, 15 farmers from their 20s to 60s attended a lecture given by Cho Eun-joo, a popular lecturer at the Naver Shopping Education Center.

An agricultural education and technology center in North Jeolla’s Gochang County also provides farmers with similar crash courses on social media marketing. The classes are held eight times per semester and 25 farmers in their 40s and 50s are currently registered.

In these lectures, farmers learn how to create blogs on their own and create stories for their fields and crops, QR codes for their farms and videos to advertise their products.

“Many of these farmers know how to farm and they do it well, but they lack skills in retail,” said Lee Hee-soo, director of farming management at the agricultural center of Gochang. “Learning and acquiring these skills at the lectures will help the farmers create effective networks to sell their goods.”

The agricultural centers of Yeoncheon County in Gyeonggi and Jecheon in North Chungcheong are among others also providing farmers with similar crash courses on social media marketing.

The provincial government of Gangwon provides subsidy for farmers who are just starting their farming businesses in the province. It provides 800,000 won a month for a year to a designated farmer aged between 20 and 45, and 500,000 won a month the following year.

“I was surprised to find out that a lot of money goes into buying pesticides and other necessities in farming,” said Shin Seung-joo, a 32-year-old who started receiving the farmers’ subsidy in January. “The subsidy is really a lifesaver.”

“Providing these subsidies will help younger farmers who are just starting out to settle in better,” said Eo Jae-young, head of the Agricultural Administration Bureau of Gangwon provincial government, “and this, in turn, will encourage more young people to become farmers.”