Lotte chairman will not be held

Lotte chairman will not be held 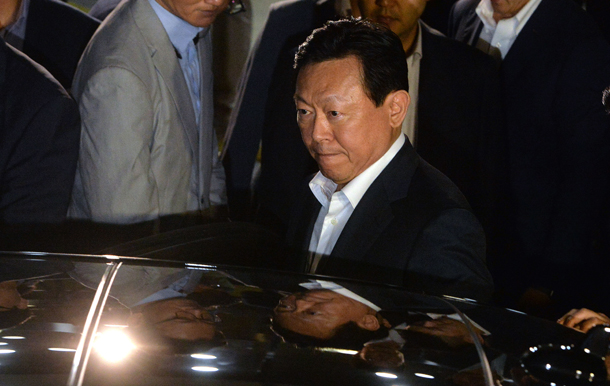 “It’s difficult to recognize the necessity and reasonableness of Shin’s pretrial detention,” said senior judge Cho Eui-yeon in dismissing the request, “taking into consideration extenuating circumstances regarding the major charges and a lack of evidence against Shin.”

At the hearing, Shin’s lawyer detailed these extenuating circumstances, saying that most of the charges against his client concern events that took place while his father Shin Kyuk-ho, founder of the group, was in charge of the retail giant.

Shin was accused of embezzlement and corporate malpractice amounting to some 170 billion won ($154 million).

“Prosecution investigations revealed the gravity of Shin’s charges in allowing the owner family to make illegal profits out of Lotte Group amounting to 128 billion won,” prosecutors argued at court on Thursday.

“We regret very much that the court made its decision solely based on the plaintiff’s defense, despite the weight of the case,” the prosecution team said in their official statement. “The court’s ruling will make things more difficult for future prosecution investigations into corruption cases of conglomerates. The ruling sets a precedent that says executives can get away with corruption.”

Lotte Group is the country’s fifth-largest conglomerate. It is accused of running slush funds, embezzlement, tax evasion and other forms of corporate malpractice.

“The prosecution will be reviewing whether to file another request for a pretrial detention warrant for Shin,” said a prosecution official.

The 61-year-old chairman of Lotte Group is the highest-level executive to be investigated by the prosecution since it opened the probe about 100 days ago, marking the first time Lotte became the target of a large-scale prosecution probe since its founding in 1967.

From June, the Seoul Central District Prosecutors’ Office kicked off a massive investigation into the retail giant, dispatching hundreds of investigators to raid Lotte headquarters, some 30 affiliated companies and executives’ residences.

But critics say the prosecution team lost its momentum over time as its requests to the court for arrest warrants on Lotte executives, including Kang Hyun-koo, CEO of Lotte Homeshopping, were denied.

Kang is charged with lobbying government officials with bribes and forming slush funds. Prosecutors were reportedly planning on detaining Shin first and then going after Kang again with another request for a pretrial detention warrant, but the door to this thread of actions closed with the latest court ruling.

The prosecution team, in requesting an arrest warrant on Shin, also left out charges against him on his involvement in the creation of slush funds worth some 30 billion won at Lotte Engineering and Construction, for lack of evidence.

Prosecution summons on the group’s vice chairman, Lee In-won, also ended without results as Lee was found dead on the morning of his summons. The prosecution will be concluding its probe by indicting members of the Shin family next week.

Lotte Group, long concerned that Shin’s possible detention may result in a serious blow to the group’s business, appeared relieved at the news.

“The group will normalize its business as soon as possible to minimize the losses of clients, affiliates and employees,” Lotte Group said in its official statement on Thursday. “We will be working on normalizing investments and other medium- and long-term plans that have been immobilized during the prosecution probe.”

Shin promised to solve problems at the group. “The group has its faults, and I will be fixing them,” he told reporters before leaving the court on Thursday morning.

He reportedly ordered the staff to come up with reports to improve the leadership structure and transparency of the conglomerate after returning to his office on Thursday. “We have escaped the worst,” said an employee of the group.