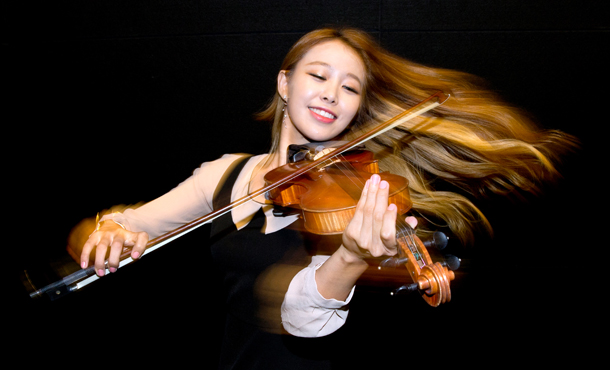 Jenny Yun, a 25-year-old who majored in classical violin as an undergraduate and graduate student, is now a violin teacher who makes video clips that have gone viral. [lim hyun-dong]

A 20-something woman in a red off-shoulder blouse and a white miniskirt dances while playing the violin against the backdrop of four other girls in a video clip on YouTube. She plays the tune “Cheer Up” by the popular girl band Twice.

It has been immensely popular, and has had over 980,000 views so far. The violin player in the video is Jenny Yun, a 25-year-old who majored in classical violin in university and graduate school in Seoul and is now a violin teacher. She began shooting what she calls “danceolin,” a portmanteau of “dance” and “violin,” a term she coined on her own for her YouTube channel five months ago. Now subscribers to her channel, named “Violinist Jenny Yun,” total over 110,000.

“I always loved dancing and I suddenly came up with this idea to accompany my violin playing with dance,” she said in a recent interview. Yun first uploaded a video of herself playing “Rough” by the girl group Gfriend, just for fun, on YouTube in April and the reaction from viewers was unexpectedly good. 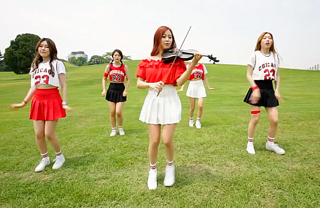 A still from Jenny Yun’s “danceolin” video “Cheer Up,” set to her violin cover of the popular tune by girl group Twice. [youtube]

“I was motivated to do more when people loved what I was doing for fun,” she said.

So far, she has uploaded almost 10 videos and in the meantime formed a team called Tomato with two of her friends, who also love dancing. She taught herself how to dance and signed up for a dance academy for a month.

“Completing one danceonlin clip normally takes a month,” she said. “You first master the choreography and combine the violin play with it later. I make it a rule to practice until I can fully get accustomed to the dance because when you do both playing and dancing, either of them could go wrong.”

She always chooses K-pop numbers with melodies and choreographies that suit the violin.

Yun is a seasoned violinist who has won prizes in several competitions.

“Some people around me gave this uncomfortable look that goes, ‘When you can hardly be recognized for playing the violin, why do you go so far as to dance?’ But once they watch my video, they confessed they wanted to do it, too.”

She hopes people can be more interested in violin playing through her work.

“I am most glad to see people who say they began learning the violin after seeing my video,” she said. “I also wish to show them that the violin can be a fun form of entertainment. Danceonlin is one of a range of fun projects I want to pursue with the violin.”