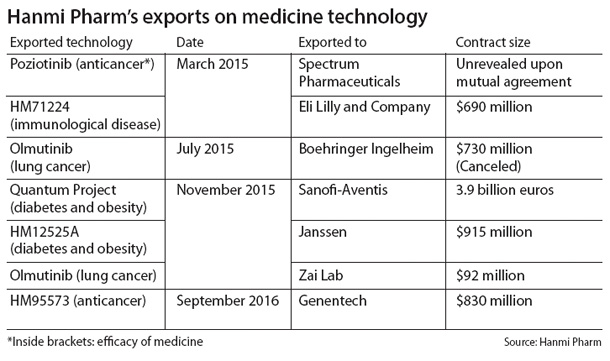 Hanmi Pharmaceutical shares have been on a roller coaster ride in the past two days after the company released mixed news regarding its contracts in medicine development.

The exclusive rights to the third-generation epidermal growth factor receptor targeting agent that the Germany-based pharmaceutical company signed on for $730 million in July last year will be returned to Hanmi. Boehringer Ingelheim has so far paid less than 10 percent of the contracted amount, or $64 million, for the exclusive rights.

It is said that Boehringer Ingelheim came to the conclusion that Olmutinib, which is on its global phase-3 clinical trial, won’t be able to compete with rival Tagrisso by AstraZeneca, which has already been approved by the U.S. Food and Drug Administration.

Despite the contract with Boehringer Ingelheim nullified, Hanmi said the damages are not severe.

“Although not huge, we did see a surplus from the deal, so it wasn’t pure loss for us,” a Hanmi spokesman said.

News of the breakup came a day after the company’s shares performed strongly on news that American bio company Genentech had signed an exclusive development and license agreement on the candidate substance HM95573, which is expected to treat multiple types of cancers. The company’s shares rose 0.97 percent on Thursday from Wednesday.

“The substance started development around 2010 and has been under clinical development since last year,” a Hanmi spokesman said. Its development was subsidized by the Ministry of Health and Welfare, which offered 600 million won.

As a result of the deal, Genentech obtained the exclusive rights to develop and commercialize HM95573 in any country in the world aside from Korea.

In return, Genentech paid Hanmi $80 million for the contract and promised gradual payments of $830 million for clinical development, regulations and commercialization of the candidate, which will be paid as Genentech succeeds each step with the compound. Double-digit loyalties were also part of the deal if the substance makes it into the market.

This means that Hanmi’s contract with Genentech is worth $910 million, under the condition that the exported HM95573 passes through multiple development processes and regulations until it is finally commercialized into a medical treatment.

Hanmi is currently the bio industry leader for technology exports in Korea, having signed five contracts with companies in Germany, China and the United States last year that amounted to at least $6.1 billion in total.