Naver and Line plan to invest in French start-ups

Naver and Line plan to invest in French start-ups 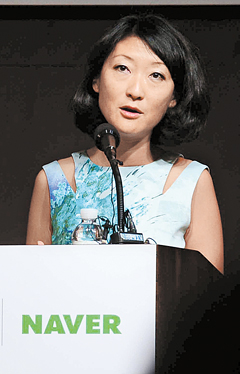 Former French Minister of small and medium-sized firms (SMEs), Innovation and Digital economy as well as Trade Secretary and then Minister of Culture and Communication Fleur Pellerin at The Westin Chosun Seoul on Friday. [NEWSIS]

The homegrown giant search engine Naver and its chat app affiliate, Line, decided to make a joint investment worth 100 million euros ($112 million) to a European investment fund in a strategic move to go global.

Naver and Line will inject 50 million euros each into “K-Fund 1,” operated by Korelya Capital, founded by French-Korean adoptee Fleur Pellerin, who served as a French government minister pursuing policies to create a favorable business environment for start-ups, represented by “French Tech,” until she resigned in February.

“We are happy to maintain good businesses in Asia, largely thanks to popularity of Line, and our next challenge is to enter the European markets,” said Lee Hae-jin, founder and president of Naver, during a press conference held Friday at The Westin Chosun Seoul in Jung District, central Seoul. “It’s a strategic investment [not only for financial gains] but with considerations to launch new businesses.”

The investment into the fund will grant Naver and Line a chance to discover strategic partners to expand their presence in the European market, where market conditions differ greatly from Asian markets. The IT sector is mostly dominated by U.S. giants like Google and Facebook, while WhatsApp has dominant market shares in mobile chat service companies.

“It took us about a decade and a full five years, even after aggressively tackling the Japanese market, to make notable performance there,” Lee said. “It will take us some time to study the users in Europe.”

Having served from 2012 as minister of Small and Midsized firms (SMEs), Innovation and Digital Economy as well as Trade Secretary and then Minister of Culture and Communication from 2014, Korelya CEO Fleur Pellerin has worked to support French entrepreneurs and provide a level playing field for start-ups in France.

“Korelya Capital’s objective is to nurture at least one potential European ‘unicorn’ over the coming years,” the French company said in a statement. “By joining forces with Naver and Line, we will provide [European] entrepreneurs with the experience of a global success story, the funds they require to meet their goals, key technologies and a special opening to the Asian market.”

Target start-ups are those with expertise in technologies, including big data, machine learning, deep learning and the Internet of Things. The fund will be activated in November.

Lee announced in July, after listing Line on both the New York and Tokyo stock exchanges, that the company “will come up with a new approach for the North American and European regions” to establish stronger market bases in regions where Line has struggled to gain momentum.