The art of writing and typography: Exhibition seeks to help traditional calligraphy find a place in modern society

The art of writing and typography: Exhibition seeks to help traditional calligraphy find a place in modern society 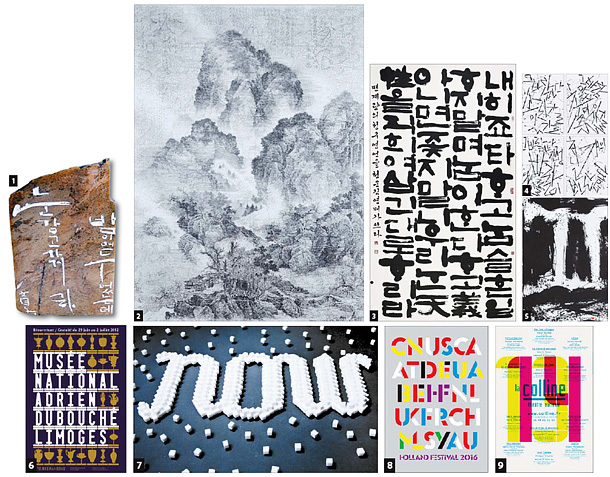 Calligraphy in ancient Korea was a creative activity reserved for the cultured class.

Great thinkers expressed philosophies with calligraphy, sometimes accompanied with paintings, and exchanged them. That, before the time of the Internet, was the way of having important scholarly discourse. Today, the pieces that remain are costly antiques.

Even up until the 80s and 90s in Korea, a well-written piece decorated the walls of many living rooms to be admired by guests and young students often learned calligraphy as an extracurricular activity.

Today, however, with people more comfortable with keyboards and touch screens, few people practice calligraphy. In fact, many people don’t write by hand at all any more.

Against this backdrop, there is an exhibition that attempts to help traditional calligraphy find a place in contemporary society. Titled “Hangeul Calligraphy x Latin Typography,” the exhibition juxtaposes the calligraphy pieces by Korean artists with typography pieces using the Latin alphabet created by foreign counterparts.

The exhibition comes as the AGI Congress was recently held in Seoul. AGI, Alliance Graphique Internationale, is a gathering of the world’s most renowned graphic artists and designers.

The exhibition, organized by Seoul Arts Center, AGI Korea and Gyeongnam Letter & Civilization Research Society, displays about 150 pieces by about 60 artists. They include 41 Korean artists whose pieces revolve around Hangul, the Korean alphabet system; as well as 26 foreign graphic designers who belong to AGI. One of them is Helmut Schmid, the Austrian-born German typographer who designed the Pocari Sweat logo.

Among the Korean artists is Yoo Seung-ho, who creates landscapes with minute texts. Critics say his “text landscapes” redefine the meaning of conventional text. Other artists include Park Kum-jun who has worked in PR, advertising and eventually graphic design; Park Se-ho whose abstract brushstrokes are thought to be the new, contemporary Korean calligraphy; and Song Hyun-soo who’s known for his calligraphy performances.

Foreign graphic designers include Stefan Sagmeister from the U.S. who’s worked with artists like the Rolling Stones for packaging; Dirk Behage and Evelyn ter Bekke from France who are young communication design experts who have done graphic design work for the Louvre and many other institutions; and Ed Fella, the award-winning American graphic designer whose experimental pieces are displayed at the National Design Museum and MOMA in New York.

“The exhibition is the rendezvous of calligraphy, that carries the spirit and culture of ancient East Asia, and design in a fast-changing digital era,” organizers said through a press release. “In addition, it’s a venue where we can introduce the calligraphy culture, which is the root of Korea’s text art, to graphic designers from around the world.”

The “Hangeul Calligraphy x Latin Typography” exhibition runs at the Seoul Calligraphy Art Museum until Oct. 19. Hours are between 11 a.m. and 8 p.m. The museum closes every Monday. Tickets for those aged between 19 and 64 are priced 8.000 won ($7.3). For reservation call the Seoul Arts Center at 02-580-1300 or Naver.