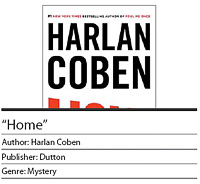 Fans of Harlan Coben will be thrilled to learn that he brings back his iconic series character Myron Bolitar to tackle a mystery over 10 years old in “Home.”

Bolitar’s best friend, Win, receives a cryptic email that sends him to London where he’s led to believe that he will find Patrick and Rhys, two boys kidnapped 10 years earlier when they were six years old. He sees a boy he thinks is Patrick, assuming the age-progression software is accurate, but the teen runs off before he can talk to him. And if it is Patrick, where is Rhys? Win calls the man he knows he can trust to help him: Myron Bolitar.

Myron and Win uncover a vast network run by a ruthless man who promises them both boys for a hefty price. It’s worth it to them, since two families they care about have been living with painful memories and no answers for a decade. The ensuing rescue doesn’t go as planned, and once the parents learn about what Myron and Win have been doing the true mystery begins. Who was responsible for the kidnapping? Where have the boys been for the past 10 years?

Coben knows how to play with readers’ expectations, and he’s crafted another suspenseful and twisty tale. Fans and newcomers alike will feel as if good friends have come home.