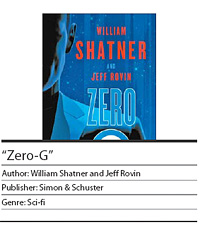 Imagine someone similar to actor William Shatner as an FBI deputy director running a space station in the year 2050. That premise jumpstarts “Zero-G,” an inconsistent sci-fi novel by Shatner and co-author Jeff Rovin.

Samuel Lord runs the space station Empyrean, and his “Zero-G” men investigate everything the current FBI would, except these agents are responsible for everything that occurs outside of Earth’s parameters. There are other countries that have orbiting stations as well, so in addition to fighting crime, they are spying on their close rivals.

A tsunami that appears to have been created kills many, and it ties into the arrival on the station of a scientist named Dr. May. Her research has been stolen, and she seems to know more about what happened than she lets on.

“Zero-G” is extremely disjointed. Some of the characters are intriguing, especially Associate Deputy Director Adsila, who has the capability to shift from a man to a woman depending on the circumstances. Others who represent people from other countries are nothing more than a name.

The setting shows lots of promise, but the random use of tech-heavy words without explanation or the shifting points of view in the narrative easily pull the reader out of the story.

Shatner is a fine actor with some terrific book credits but his latest effort is somewhat disappointing.