Who wants a ticket to Mars?

Who wants a ticket to Mars? 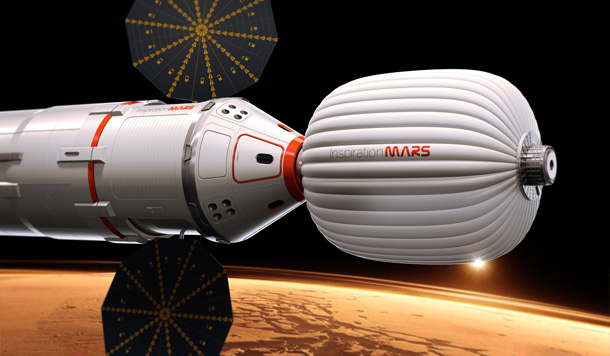 A drawing provided by Inspiration Mars shows an artist conception of a spacecraft envisioned by the private group, which wants to send a married couple on a mission to fly by the red planet and zip back home, beginning in 2018. [AP/NEWSIS]

SpaceX CEO Elon Musk made a splash at the International Astronautical Conference in Mexico with his plans for an Interplanetary Transport System, along with a disturbingly inspirational ultimatum: “There are really two fundamental paths. One path is we stay on Earth forever and there will be some eventual extinction event ... The alternative is to become a space-faring civilization and a multi-planet species, which, I hope you would agree, that is the right way to go.”

Unless we slip the surly bonds of Earth, humankind is doomed. The only alternative — the right thing to do — is to colonize Mars. Manifest destiny!

Musk’s plans for a giant 42-engine rocket leave little doubt that we will one day have the technology to send humans to the red planet. But throughout the hour-long presentation, Musk did not exactly specify how the first interplanetary settlers will survive the harsh environment on Mars.

Artistic renderings of space colonies depict plexiglass domes full of green plants and grow lights. But even if we develop the technology to build pressurized hamster balls, it needs to be recreated on Mars. The first settlers won’t have the luxury of towing a climate-controlled terrarium in the cargo hold of a SpaceX rocket. They’ll have to work the earth and figure out how to live off the fat of the Martian land.

Mars is not exactly prime real estate. The average temperature is negative 80 degrees Fahrenheit. Even during the warmest part of the year, temperatures reach a high of 68 near the equator and still fall to negative 100 at night. Without the dense atmosphere of Earth, temperatures can fluctuate dramatically, causing powerful dust storms that shroud the entire planet.

Also unlike Earth, Mars doesn’t have a global magnetic field. Combined with the thin atmosphere, there isn’t much to shield its inhabitants from the gigantic nuclear reactor that is our sun. Surface conditions on Mars are comparable to life near Chernobyl in the late ’80s, and no amount of Coppertone will protect humans from the deep-space radiation burn. For the most part, we should plan for life on Mars the same way we might plan for life after a nuclear apocalypse. That is, we can expect to live in underground burrows, like rabbits or prairie dogs. The first Martian settlers will be busy building fallout shelters.

The expected price for a ticket to paradise? Early trips might go for as much as $10 billion per seat, but Elon Musk envisions an eventual one-way fare of $200,000 after reaching economies of scale. Why on Earth would anyone pay the median cost of an American home to launch themselves into a post-apocalyptic climate?

“I think that Mars is gonna be a great place to go,” Musk says. “It will be the planet of opportunity.”

There was a time when people called America the land of opportunity. But it hasn’t always been that way for everyone. For the early settlers, the New World tended to be the place to go only if you were completely out of luck at home.

During the Age of Exploration, a large portion of immigrants to colonial America were dragged there as convicts or slaves. During the 1700s, only a quarter of American immigrants arrived with their freedom. Those who came voluntarily did so largely to escape religious persecution. After the American Revolution, the story repeated itself in Australia.

Undeveloped settlements tend not to be luxury destinations for the rich. Most early colonists in the New World died of disease or starvation in the foreign climate. Conditions on Mars will be far tougher, and we can be pretty sure that there won’t be a native Martian Squanto standing by to lend a helping hand.

Those who can afford a ticket to Mars are the least likely to want to move there. At best, Mars will be the destination of the tired, the poor and the marginalized. Which means SpaceX will need to drastically reduce the ticket price or come up with a financing program more palatable than indentured servitude. Maybe after a few centuries of development and inevitable lost lives, the planet can plausibly become a destination for wealthy libertarians.


*The author is a blockchain engineer at Global Financial Access, a financial technology company in San Francisco. Previously she was a lecturer in the electrical and information engineering department at the University of Sydney.