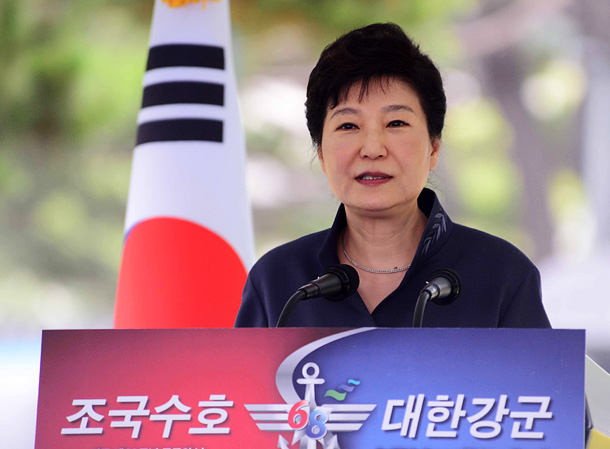 President Park Geun-hye issued a blunt message to urge North Korean soldiers and citizens to defect to the South, inviting criticisms from liberal politicians over her provocativeness while fueling speculations about conditions in the reclusive communist regime.

Park made the comment in a speech at a ceremony to mark Armed Forces Day on Saturday. In the speech, she addressed the latest security crisis caused by the Kim Jong-un regime’s nuclear and missile development and the South’s determination to counter it.

Park made perhaps the most provocative proposal by far to North Koreans. “Today, I want to clearly tell the reality that the North Korean regime is facing to the North Korean authorities, military and people,” she said, stressing that it is a misunderstanding and miscalculation of the young North Korean ruler to expect to achieve security and internal unity by demonstrating its nuclear and missile capabilities and escalating military tensions.

She noted that the international community is reacting differently from the past to the North’s provocations and the North is facing strengthened pressures and sanctions, while the negotiation stage has ended.

She, then, directly addressed the North Korean people. “We know the brutal reality that you are facing now. The international community is also seriously concerned about the North Korean regime’s human rights abuses.”

Promising that the South will do its best to end the North’s provocations and inhumane rule, Park said, “We will leave the path open for the North Korean people to find hope and life. Come to the free land of the Republic of Korea at any time.”

In the talk, Park also urged the South Korean military to be ready for contingency in the North. She said the number of North Korean residents escaping due to famine and oppression is increasing and even the elites and soldiers, who supported the regime, are defecting. She warned that Pyongyang may commit terrorist activities and provocations to stop the internal chaos and stir confusion in the South.

Park’s message was by far the most outspoken and straightforward invitation to the North Korean people to abandon their communist homeland. She also addressed the soldiers of the North, an unprecedented provocation to the country whose regime security is based on its military capabilities.

The liberal opposition parties were critical of Park. “She appeared to be very angry, but that doesn’t solve the contradiction on the Korean peninsula,” Rep. Ki Dong-min, spokesman of the Minjoo Party of Korea, said, urging her to accept the opposition parties’ demands to talk to the North.

“If you directly talk about the collapse of the North and defections of its people, it is a de facto declaration of a war, no longer just a pressing message to the North Korean leader,” he said in a Facebook post. “The North is an enemy in a war, but it is also a partner in a dialogue and peace. It would have touched the North and the world better if she proposed to send rice to the flood-stricken North, rather than issuing a stern message.”