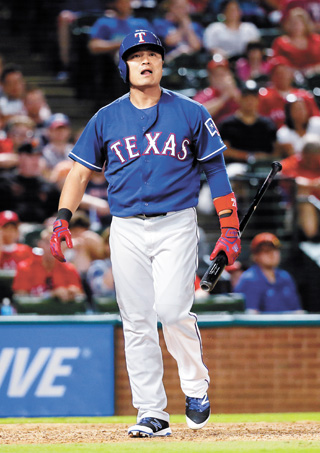 And then there were two.

The regular season of Major League Baseball (MLB) began with eight Korean players at the outset, but only Choo Shin-soo of the Texas Rangers and Kim Hyun-soo of the Baltimore Orioles will see action in the coming postseason.

While some MLB teams were still jockeying for spots during the final weekend of the regular season, the Rangers saw their postseason berth secured a couple of weeks ago. The past weekend was merely a tune-up for the coming playoffs.

The Rangers took the regular season trophy in the American League (AL) West division with a season record of 95 wins and 67 losses, their winning percentage standing at .586, making them the second-winningest club in the entire league after the Chicago Cubs with .640.

The Texas team’s feat, though, is hardly a testament to Choo Shin-soo’s performance. The Korean outfielder’s third season with the Rangers has been plagued with injury after injury, sending him to the team’s disabled list four times. His latest in August was due to a fractured forearm.

Choo returned from the disabled list on Friday, going 2-for-12 in just three games over the weekend. This year during the regular season, he batted .242/.357/.399 with seven home runs, 17 runs batted in and 27 runs scored, a rather disappointing number for a player whose contract is reportedly worth $130 million.

But the past is the past. With the team now in the playoffs, Choo has his eyes set on the coming postseason to make up for his less than mediocre regular season stats. “I trust it 100 percent,” Choo told the local Texas newspaper Star Telegram about his left forearm. “Mentally, everything is different [in the major league].”

For the other Korean MLB players - Oh Seung-hwan of the St. Louis Cardinals, Lee Dae-ho of the Seattle Mariners, Kang Jung-ho of the Pittsburgh Pirates and Kim Hyun-soo of the Baltimore Orioles - the past weekend was crucial since their respective teams were vying for wild-card spots in the postseason.

Kang and Oh faced each other in a two-game series, and even though Kang made his 21st MLB home run over the weekend, the Cards got the best of the Bucs and won both games.

But after the Giants beat the Los Angeles Dodgers on Sunday, the Cards came up short, ending their run for the playoffs.

Lee and the Mariners also saw their playoff tickets slip.

By the end of the weekend, Kim of the Orioles was the only Korean player smiling as the O’s clinched a wild-card spot with a 5-2 win over the New York Yankees at Yankee Stadium. 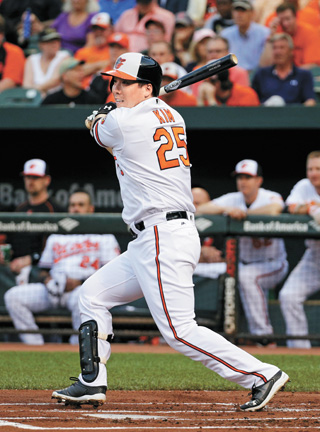 Kim’s rookie season this year was as dramatic as any. After a slump during spring training, Kim was almost relegated to the minors. He stayed on, but he was mocked by fans, and Buck Showalter, the Orioles’ manager, excluded him from the starting lineup.

But Kim kept his pace and exploited any chance he got, finally gaining nicknames like “batting machine” and the “O’s Ichiro Suzuki” after his ability to get to bases became an invaluable asset for the team’s success. His regular season peaked last Thursday when he salvaged the team from a miserable defeat by sending off a pinch-hit home run, his sixth of the season.

MLB.com commended his home run, saying, “Kim’s two-run homer completed the O’s comeback efforts and helped turn the momentum in their favor in a key final-week series in Toronto. The one-out, ninth-inning homer was one that Orioles fans won’t soon forget.”

Kim batted an impressive .302 this season with 22 runs batted in and 36 runs scored.

The Orioles and Kim now face the Toronto Blue Jays, another wild-card club from the AL. The winner of the two will meet Choo’s Rangers on Thursday, local time.

Two other Korean players, Choi Ji-man of the Los Angeles Angels and Park Byung-ho of the Minnesota Twins, saw their teams knocked out of the postseason early on. The Angels finished fourth in the AL West division with 74-88, and the Twins finished rock-bottom in the AL Central division with 59-103.

And there will be at least one Korean player who will not see playing time despite his team making the playoffs. Ryu Hyun-jin, the Dodgers’ starting pitcher, underwent surgery on his left elbow last Wednesday, ending any possibility of him taking the mound this year.

Last May, Ryu received surgery on his left shoulder and was absent from the active roster. After a long rehab stint, Ryu pitched his first big-league game on July 7 this year, during which he struggled mightily on the mound.

Immediately following the game, he felt pain on his left elbow, dashing his hopes for a comeback this season.