Playing with perspectives and philosophies

Playing with perspectives and philosophies 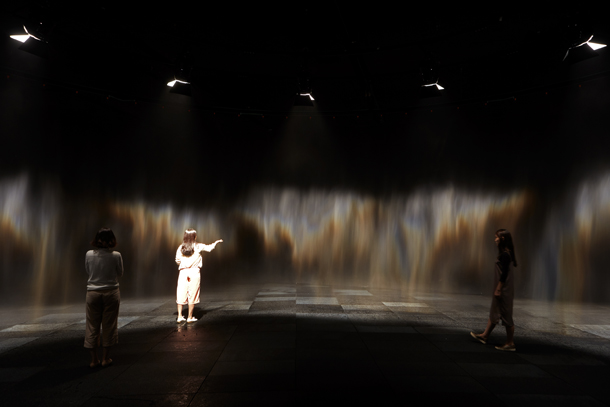 “Rainbow Assembly” is a work by Olafur Eliasson, one of the world’s major artists today, now on view in the Black Box of Leeum or the Samsung Museum of Art in central Seoul as part of his solo exhibition “The Parliament of Possibilities.” [LEEUM]

Inside the walls of a museum, rains falls from the ceiling while rainbows dance like the Northern Lights in the rain’s mist.

This unusual sight is a work by Olafur Eliasson, one of the world’s major artists, now on view in the Black Box of Leeum, or the Samsung Museum of Art, in central Seoul, as part of his solo exhibition, “The Parliament of Possibilities.”

The work titled “Rainbow Assembly” has water falling from sprinklers installed in a circle on the ceiling. With light, the mist created shines white against the dark. If viewers go through the veil of mist and stand inside the circle, they will see rainbows shimmering and undulating around the water curtain.

The sprinklers and spotlights that make the rain and rainbows are exposed to the visitors of the exhibit. Despite that, the romantic magic of the artwork remains. Others may be curious about the scientific principles behind the work. The coexistence of poetry and science has been an important characteristic of the 49-year-old Danish-Icelandic artist’s oeuvre.

The artist regards the audience’s perception as the element needed to complete his works, in regard not only to art’s social role but also to his philosophy about experience and consciousness.

“There are three elements that make a rainbow - light, water and your eyes,” Eliasson told the reporters in a preview of the exhibition a week ago. “An artwork, or the world, is in your eyes. If you move, the perspective changes. If you close your eyes, there is no rainbow. So, this rainbow may be a private art. You are not a consumer. You are the producer. You are the artist, while I’m the rainbow machine fabricator. You, with your eyes, create the reality in this assembly.”

From left, Olafur Eliasson’s “The Shape of Disappearing Time,” “Your Unpredictable Path,” “Reversed Waterfall” and “Your Museum Primer” are also part of the artist’s solo exhibition at Leeum which runs through Feb. 26. [LEEUM]

Behind the artist’s simple and easy words is the idea of phenomenological thinking - profound and not so easy to understand immediately. The philosophical idea, developed in the early 20th century, see phenomena as what appear in acts of perception and consciousness. The ideas are against the common idea that there exists an objective reality that people perceive.

“Eliasson’s works are based on the philosophical idea of phenomenology” explained Hyewoo Woo, chief curator of Leeum. “This is related to the fact that he never hides, but rather exposes the mechanisms that produce his artworks. In this way, he makes the works not illusions that deceive and seduce the viewers, but rather demonstrations of how reality is always constructed.”

As Woo said, 21 other works in the Leeum exhibition, including the installations “Reversed Waterfall” and “Your Museum Primer,” have their structures uncovered.

The “Reversed Waterfall” reverses the usual gravitational flow of water with a system of pumps and hoses that shoots jets of water upwards, “perhaps suggesting thoughts about the relationship between human activity and nature,” according to Woo.

The work “Your Museum Primer” could lead visitors to feel the cosmic sublime, with a relatively simple mechanism. A ring of prismatic glass that rotates in the focused beam of a spotlight produces rings and spots of light constantly changing in size, color and form on the darkened room’s walls, which may remind viewers of celestial bodies and their orbit revolutions.

And one of the most lyrical works in this exhibition, “Your Unpredictable Path,” is also related to natural phenomena and interstellar space. The work, which the artist calls a “poetic painting,” is an arrangement of more than a thousand crystal spheres on a black background, which may remind the viewers of the starry night sky. When visitors approach the work, they will see countless inverted reflections of themselves on the glass spheres.

“It is said that stars represent our past and tell the story of our ancestors,” the artist told the reporters. “If you listen to the stars, in a moment, the stars will listen to you.”

Like this, Eliasson’s art in general encompasses a certain perception of nature and brings the natural world from the outdoors to inside museums.

Asked why nature, particularly light, is a constant source of inspiration for the artist, he said in an interview with the Korea JoongAng Daily in 2014, “It is because it’s very democratic. Everybody has opinion about that. My real interest is in the structure of experience. Light and nature are good materials to examine, investigate and provoke experiences. I often talk about nature but, in truth, my real interest is people. Nature is just a way of touching and reaching people.”

In that interview and in the press preview of this Leeum show, he repeatedly emphasized the democratic qualities of art. “With art, people get very different experiences in the same place. We can be together without having to be the same,” he said in the press preview.

That is related to the title of the exhibition “The Parliament of Possibilities.”

“The Parliament of Possibilities celebrates the fact that the world and our feelings about it are constantly changing,” he said. “When we see things as a continuous process of production and relation, we may also see their potential. We then have the opportunity to negotiate reality, to decide together what world to build.”

The exhibition runs through Feb. 26. Admission is 8,000 won for adults. The museum is closed on Mondays. Go to Hangangjin Station, line No. 6, exit 1, and walk for five minutes.