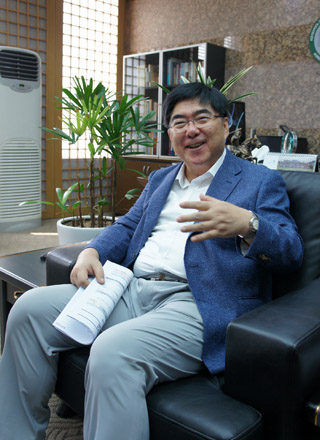 Chun Hong-tack, dean of the KDI School of Public Policy and Management, emphasizes Korea as a country where international students can study and learn from the country’s economic development experience. [KIM YOUNG-NAM]

Nearly two decades have passed since the establishment of the KDI School of Public Policy and Management, the graduate school affiliated with the state-run think tank Korea Development Institute. Since its founding in 1997, almost 1,500 students from 119 countries around the world have graduated from the institution.

The KDI School says its graduate pool is the most diverse in the nation, with many students coming from developing countries to learn about Korea’s economic miracle following the devastation of the 1950-53 Korean War.

In 2012, the institution established an online database called K-Developedia to make resources on Korea’s economic development available online and allow anyone in the world to access them for free.

Chun Hong-tack, the school’s dean, sat down for an interview with the Korea JoongAng Daily late last month at the KDI campus in Sejong City, where students of different nationalities could be seen vigorously discussing current affairs in the school’s halls.

Chun, who was a research fellow at the Korea Development Institute, took up the deanship last year and said his goal is to elevate the school’s status to a level on par with well-known institutions like the Harvard Kennedy School and Insead. As a long-time economist, Chun also said that Korea is long past its days of playing catch-up in the global market and should become a pioneer in the future.

Below are edited excerpts from the interview with Chun.

Q. Please describe the institution’s vision, what kind of students come to the school and why they chose to study here.

A. Many students from developing countries decide to come to our school to learn about how Korea became economically prosperous like it is now.

Many of the international students have had experience working in their home countries’ governments and public institutions and come to the KDI School to learn Korea’s practical business model. Among the 1,500 foreign graduates up to last year, 51 percent of them came from Asia and 31 percent from Africa, which suggests that many are from developing nations.

Students from these countries believe Korea’s economy 40 to 50 years ago was similar to their own and that Korea has become a developed country now. They believe Korea’s development is not only something they can learn from textbooks but also from actually studying in Korea.


What are some specific fields of study that such international students are interested in?

They want to learn about specific projects rather than theories. For example, they are interested in case studies of Korean success stories like reforestation, the construction of Incheon International Airport and public transportation development. Students get to learn about the national insurance system and the Saemaul Movement, which was an initiative launched in 1970 by President Park Chung Hee to modernize Korea’s rural economy.

International students told faculty members that they learned their countries could do the same things and gained more confidence about the future of their home countries.

The KDI School is running an online database called K-Developedia and other online systems to help foreigners access and research data on Korea’s economy. Can you explain more about the program?

K-Developedia aims to serve as an encyclopedia covering all types of resources on Korea’s last 70 years of development. The database includes over 35,000 pieces of textual and multimedia content, including photos and videos, and provides free links to documents on Korea’s development, all for free.

Our analytics show that people from 210 countries have visited the website and 120 countries on average use the program per month.

The institution has signed an agreement with the University of Sussex’s Institute of Development Studies for a special project to build digital content summarizing developing countries’ experiences. We also provide e-learning programs on our website and communicate with developing countries regularly to share Korea’s experiences.

What is the goal of the KDI School in the future?

As international students continue to show interest in Korea’s 20th-century development story, I believe the country needs to do well in dealing with new challenges such as the fourth industrial revolution and an aging population in order for the school to become attractive in the future.

The school was modeled after the Harvard Kennedy School, and we believe we have been doing the groundwork for the past 20 years or so. In the future, I hope the KDI School becomes well known in the world as a place where people can get advanced degrees in development, public policy and public management, and as a place where they can learn not just about Korea but also development in Asia as a whole.

We believe our institution is a hidden gem, as a graduate school that focuses on public management and development. We are sure that students can learn how to become global leaders from studying at the KDI School.