Lawmaker calls for an end to cafe confusion

Lawmaker calls for an end to cafe confusion 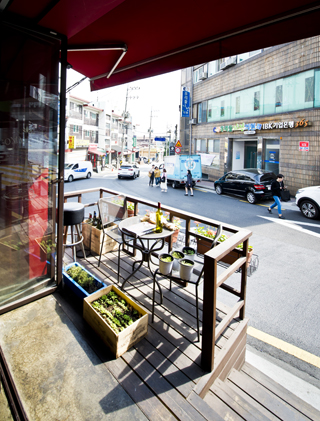 A cafe in the Haebangchon area in Itaewon, a district that allows terraces. Amendments to road and building regulations are being called for to let establishments legitimately run terraces and sidewalk cafes. [NEWSIS]

Outdoor terraces at cafes and restaurants have been in a legal gray area: regulations from different government departments have been clashing with each other.

But the contradictions may be ironed out and many terraces deemed officially legal.

Lawmaker Kim Hyun-ah from the ruling Saenuri Party, who is on the Land Infrastructure and Transport Committee, said Sunday she has proposed amendments to current road and building regulations that would allow business operators to legally run open-air terraces as long as they go through an official process for permission.

Under the current regulations, terraces for commercial purposes on the front sides of buildings have been technically prohibited based on road and building laws.

However, some local governments have been giving exceptions, leading to confusion among operators and regulators.

According to a report released by the Architecture & Urban Research Institute, 34 percent of 433 buildings on roadsides in seven commercial districts in Seoul have turned out to have violated the rules on the issue.

Kim suggested to make standards in the building regulations that precisely address which type of facilities are allowed to be built on vacant lots owned by a business operator. Kim also proposed to make amendments to current road regulations allowing either establishment of retail stands or open-air terraces on sidewalks as long as businesses get permission from local road management administrations.

“As long as the establishments don’t interfere with pedestrian traffic or aesthetic features, regulations need to promptly respond to demands from the new generation,” Kim said.

“Regarding open-air terraces that are already abundant in commercial districts, we should make guidelines to not only invigorate local economies but also aid the convenience of pedestrians and business operators, rather than pushing ahead with current regulation and making them all illegal.”