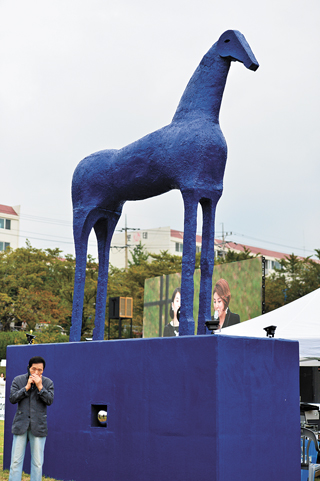 This year’s festival has the title “We Create Things, Things Create Us.”

Works by famous modern Italian sculptors including Novello Finotti, Mimmo Paladino and Michelangelo Pistoletto will be displayed at Yongji Lake, the main venue of the biennale, along with works by Korean and Chinese sculptors.

At Sungsan Arts Hall will be an exhibit featuring not only sculptures but also found objects to celebrate the 100th anniversary of the Dadaist art movement.

The Moonshin Museum of Art will hold a special exhibition of works by six recipients of the Henraux International Sculpture Award including Alex Bombardieri and Mikayel Ohanjanyan.

Admission is free. Yongji Lake is a 25-minute drive from Changwon Station. 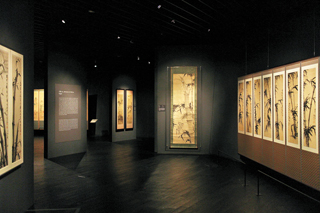 THE MASTERS OF MODERN PAINTING_CALLIGRAPHY AND PAINTING TO IMAGE

The largest piece on display is a landscape painting by Ro Su-hyun (1899-1978), which illustrates the four seasons on a folding screen 2.3 meters (7.5 feet) in length

To Nov. 6: The title of this year’s edition is “The Eighth Climate (What Does Art Do?).” According to Maria Lind, director of this year’s biennial, it is related to an alternative world or future proposed by artists with a bold imagination.

The works by 101 teams of artists from 37 countries in the 2016 Gwangju Biennale are so diverse in their mediums and themes that they are difficult to be grouped together under anything narrower than the broad theme of “What Does Art Do?”

Some, like American artist Tyler Coburn and Russian artist Arseny Zhilyaev, present bold imaginations of the future. Others, like Spanish artist Dora Garcia and Korean artist Inseon Park, deal with the sociopolitical past and present, which can affect the future. 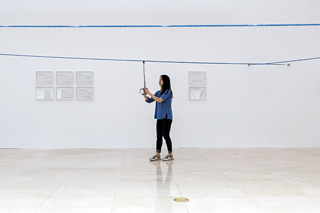 To Nov. 20: Under the odd title “Neriri Kiruru Harara,” the SeMA’s biennial festival focused on new media art, Media City Seoul, kicks off at the museum’s four branches. The theme of this year’s festival is the future of humans, which is “seen through the language of art and media from neither a utopian nor dystopian view,” according to Beck Jee-sook, the biennial’s curator, during an event in March.

The exhibits range from familiar works by Korea’s most admired artists such as painters Kim Whan-ki, Park Soo-keun and video art pioneer Nam June Paik, to works that have not been exhibited for decades for a variety of reasons. Works by famous foreign artists and hot Korean contemporary artists are seen in the “Interpret Par 2 - Relation” section.