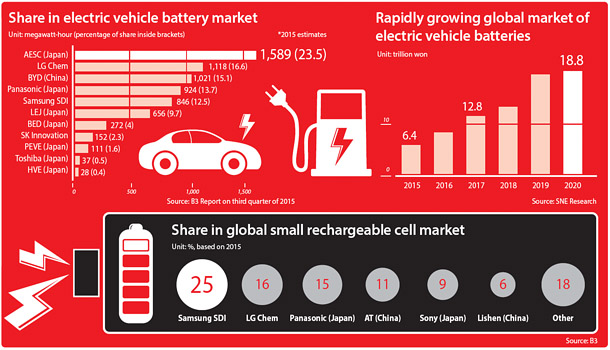 The global battery industry is fueled by three main businesses. The biggest demand comes from electric vehicle manufacturing, which has seen explosive growth in China and the U.S. As awareness of environmentally-friendly cars has grown, the demand for electric cars is on the rise. The second buyers are the manufacturers of various mobile devices such as smartphones, smart watches and tablet PCs, whose functions depend heavily on the battery efficiency.

The third, yet increasing, usage of batteries is solar power generators. Amid concerns about global warming, fossil fuels are being blamed for harming the global environment and the renewable solar power is rising as the new substitute as the main energy source.

Although it may look as though batteries have no place in the solar-power generating process, they actually play the most important role. When a solar panel produces electricity in daylight, the energy created needs to be stored inside batteries to be used at night. The electricity is stored inside Energy Storage Systems (ESS), mass storage batteries, whose electric capacity grows in proportion to the scale of the solar power market. Last year, solar panels produced 54 gigawatts, but are expected to produce up to 92 gigawatts in 2019.

Currently, the world’s battery market is mainly run by the Far East. The biggest manufacturer last year in the electric vehicle battery market was Japanese, the Automotive Energy Supply Corporation, a joint venture between Nissan Motors and NEC Corporation, which took up 23.5 percent of the global market. Korea’s LG Chem followed with 16.6 percent, then China’s BYD, Japan’s Panasonic and the Korean Samsung SDI. Korean firms are sandwiched between Japanese and Chinese companies, but speculation predicts a stable future. According to “Navigant Research Leaderboard Report: Lithium Ion Batteries for Transportation” a December report by the market research and consulting firm, LG Chem scored the highest in the assessment of battery manufacturers, while Samsung SDI took third place on the list. The results were based on 12 metrics, including market advancement strategy and production strategy, technology, sales, marketing, distribution, quality, credibility and price.

“Market shares tell the past. Navigant’s research shows that the future is bright for Korean electric-vehicle battery manufacturers,” said an LG Chem spokesperson.

Korea currently keeps the top two positions for small rechargeable cells, according to market research firm B3, with Samsung SDI taking up 25 percent of the market share and LG Chem 16 percent. Japan’s Panasonic, China’s ATL and Panasonic followed. Nevertheless, there are concerns about Samsung SDI due to its unprecedented crisis with the Note7 series. The company is said to have chosen China’s ATL as the supplier of the defective batteries.

Another assessment by Navigant Research in June 2015 on ESS manufacturers reported that LG Chem is leading the field, followed by Samsung SDI and China’s BYD. It’s notable that a small company came in fourth place in such a big market. Kokam, a Korean company, is the hidden champion who supplied its batteries to Solar Impluse2, the Swiss project on solar-powered aviation which succeeded to circumnavigate the world in July.

The success of a battery depends on whether it lasts long and safely, more than how much it costs. The government has also unveiled plans to greatly enhance Korean batteries through collaboration with the industry and academia. Also, the Ministry of Trade, Industry and Energy plans to invest a total of 43 billion won ($39 million) to double the energy density of a battery to 300 watt-hour per kilogram by 2020.

Should this project turn out to be a success, then a one-way trip from Seoul to Busan, which is more than 400 kilometers (250 miles) becomes possible with just one battery. The longest range available from a Korean electric vehicle as of now is from Hyundai’s Ioniq Electric, which can travel 191 kilometers with a single charge.