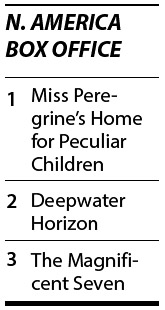 The film cost $110 million to make, meaning it will need a strong performance overseas to be profitable. It started out with $36.5 million in 59 markets. Regardless, it’s a comeback of sorts for Burton at the box office. It’s his best opening since 2012’s lackluster “Dark Shadows.”

Peter Berg’s well-reviewed disaster movie “Deepwater Horizon,” about the 2010 oil rig explosion, however, failed to tap North American moviegoers, opening with an estimated $20.6 million. Lionsgate’s “Deepwater Horizon,” starring Mark Wahlberg, also cost at least $110 million to make, yet it only managed $20.6 million in its debut. The film, which first premiered at the Toronto International Film Festival, brought all the big-budget flare of an action movie to the April 2010 explosion, which killed 11 men and for weeks spilled millions of barrels of oil into the Gulf of Mexico.

Audiences have had a surprising amount of adult-driven options at the multiplex of late, including another true tale, Clint Eastwood’s “Sully” (up to $105.4 million in four weeks), and the Denzel Washington-led Western remake, “The Magnificent Seven,” which slid to third place with $15.7 million in its second week. AP