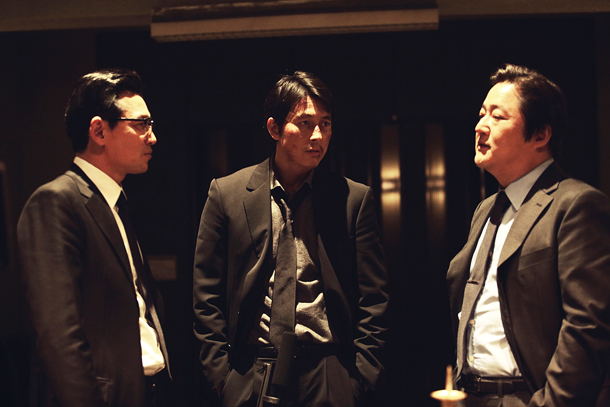 “Asura: The City of Madness” topped the local box office over the weekend, and has sold 1.8 million tickets since its release on Sept. 28. [CJ E&M]

Its sales made up 43.8 percent of the weekend’s total movie ticket sales, an impressive feat for a film with an R rating.

The violence-filled action thriller opened at 1,278 screens nationwide and has sold 1.8 million tickets by the end of this weekend since its release on Sept. 28. Starring A-list actors Jung Woo-sung and Hwang Jung-min, the movie centers around a man trapped in a circle of corruption and his struggle to survive. 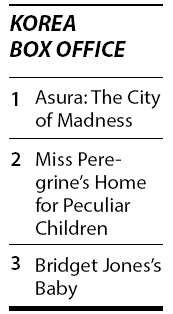 The third installment of the Bridget Jones series, “Bridget Jones’s Baby” came in third. The romantic comedy has sold 330,000 tickets since it opened locally on Sept. 28.

The film kicks off with Bridget, now in her 40s, enjoying the single life. Although she promises not to confine herself in a romantic relationship, Bridget suddenly gets pregnant, and is forced to figure out whose child it will be, deciding between her former Prince Charming, Mark Darcey, and a handsome American billionaire named Jack Qwant.

The Hollywood movie “Sully,” featuring Tom Hanks as the Captain Chesley Sully Sullenberger, who in 2009 made a miraculous emergency jet landing in Hudson River, marked the fourth spot at the weekend box office. It has drawn 180,000 viewers since its Sept. 28 debut.

The spy blockbuster “The Age of Shadows” has dropped to fifth, after topping the weekend box office for three consecutive weeks. Its total ticket sales have exceeded 7 million.

The sixth and the seventh places went to the Hollywood remake “Ben-Hur” and the animated fantasy “Pete’s Dragon,” respectively.