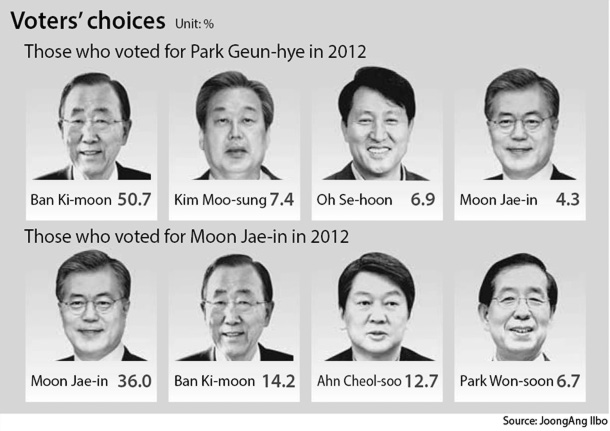 More than half of people who voted for then-ruling party nominee Park Geun-hye in the 2012 race are flocking to do the same for UN Secretary General Ban Ki-moon, while those who cast votes for Park’s rival, Moon Jae-in, are split between Moon, Ban and Rep. Ahn Cheol-soo, a poll by the JoongAng Ilbo showed.

Of the 1,000 polled on Sept. 20 and 21, 46.1 percent said they voted for incumbent President Park four years ago. Of those, 50.7 percent said they support Ban, who is widely expected to declare his bid for president upon finishing his second term at the multinational body at the end of this year.

Of those who supported Park in 2012, 7.4 percent said they would vote for former Saenuri chairman Kim Moo-sung, who is considered to be outside the governing party’s pro-Park faction. Former Seoul Mayor Oh Se-hoon came in third place with 6.9 percent, followed by former Minjoo Party chairman Moon with 4.3 percent and Ahn of the People’s Party with 3.5 percent.

In the survey, 31.7 percent said they had supported Moon in the 2012 race. Of them, 36 percent said they were planning to do the same again next year for Moon, which is significantly lower than the 50.7 percent that the UN chief received from Park supporters.

Seoul Mayor Park Won-soon received 6.7 percent support from those who had voted for Moon in 2012 while Seongnam Mayor Lee Jae-myung followed with 6.4 percent. Sohn Hak-kyu and South Chungcheong Governor An Hee-jung garnered 5 percent and 3.8 percent each from former Moon supporters.

The poll illustrates that while the UN chief is enjoying a consolidated support base with loyal ties to President Park, Park’s former rival Moon is having a hard time winning back the hearts of voters who once chose him instead of Park four years ago.

“Those who supported Park in the last election are considering Ban to be a candidate of the pro-Park faction and therefore are handing out their support for him,” said Huh Jin-jae, an official at the pollster Gallup Korea. “By contrast, those who voted in favor of Moon are being split into pro-Ban and pro-Ahn Cheol-soo camps.”

Moon’s loss of trust from his former supporters in the latest poll is somewhat inevitable given that Ahn dropped his bid to pave the way for Moon to run as a solidified candidate from the opposition bloc in the 2012 race. Despite absorbing Ahn’s supporters, Park defeated Moon by a margin of 3.53 percent.

On what will be the most important agenda for the 2016 election, “economic growth” was selected by 31.7 percent of respondents, followed by “economic democratization,” with 15.5 percent, which was used as a major platform goal by both ruling and opposition candidates in the 2012 race. Protecting national security in the face of a North Korean threat came in third with 12.3 percent while widening welfare benefits came in fourth with 11.6 percent. Improving economic inequality followed with 10.6 percent.

Voters in all age groups all across the regions, except for Jeju Island, chose economic growth as the most important election issue. Voters in Busan and South Gyeongsang expressed a particularly acute sense of urgency with regard to economic growth, with 37.7 percent of respondents. Busan and its surrounding areas in South Gyeongsang have been stuck by the rapidly worsening shipping industry that has resulted in a massive number of layoffs in recent months.