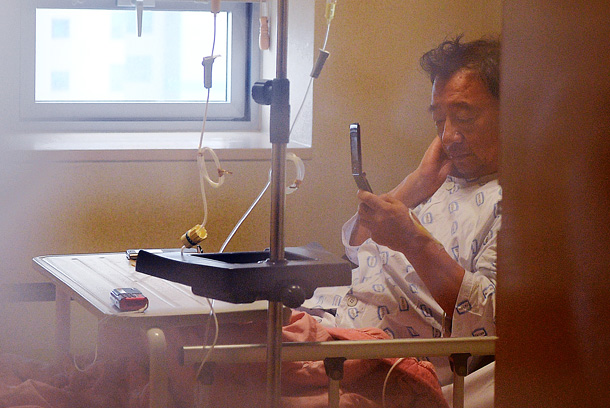 Lee Jung-hyun, chairman of the ruling Saenuri Party, checks his cell phone on his sickbed in Yeouido St. Mary’s Hospital on Monday. Lee was taken to the hospital on Sunday after ending a seven-day hunger strike to press National Assembly Speaker Chung Sye-kyun to quit. [NEWSIS]

Ruling party lawmakers will participate in the parliamentary audit of the government today after the Saenuri Party announced Sunday it will end its week-long boycott and agreed with opposition parties to extend the duration of the audit.

National Assembly Speaker Chung Sye-kyun on Monday visited a hospitalized Saenuri Party Chairman Lee Jung-hyun, who was recovering from a seven-day hunger strike, while the vice floor leadership proceeded to hold talks to get beyond the stalemate in the assembly and extend the audit by up to four days.

The 20-day National Assembly audit of the government and public offices started on Sept. 26, but the Saenuri boycotted the sessions to protest the opposition parties’ passage of a motion to demand the dismissal of Agricultural Minister Kim Jae-soo two days earlier.

Lee started a hunger strike on the same day to call for the resignation of the parliamentary speaker for having arranged the vote, which was participated in by the opposition alone, challenging the integrity of the voting process and Chung’s political neutrality.

The Saenuri chief camped out at the National Assembly during his hunger strike and on Sunday was visited by opposition Minjoo Party of Korea Chairwoman Choo Mi-ae.

As Lee’s condition declined, he declared in a statement an end to his hunger strike later that day “for the sake of the livelihood of the public and national agenda.” He urged his party to resume the audit but also called for the National Assembly Act to be revised to include a clause requiring the neutrality of the parliamentary speaker.

He was driven by ambulance to a nearby hospital that evening.

“While it is the will of the people to set straight any departure from the neutrality of the National Assembly speaker and the foundation of the parliamentary system,” Saenuri floor leader Chung Jin-suk told reporters Sunday, “it is also the public’s opinion that there shouldn’t be any more delay in the parliamentary audit to take care of the people’s livelihoods.”

Speaker Chung, ahead of a business trip, visited Lee Monday at the Yeouido St. Mary’s Hospital in western Seoul, where the Saenuri chief was recovering. During the visit, the speaker was said to have urged Lee to “recover quickly.” Chung was bound for a trip to Australia to attend a parliamentary speakers’ meeting.

Saenuri Floor Leader Chung also paid a visit to Lee in the hospital that day and told reporters afterward, “It will take some time for Chairman Lee to recover. He is stubborn and did not even drink a drop of water for a week so his body is in a very weakened state.”

Lee conveyed an apology through a spokesperson on Monday. “I apologize to the people for not attending the parliamentary audit for the past four work days, regardless of the reason,” he said. “In order to recover the four days lost, we will concentrate in order to conduct an audit for the benefit of the public livelihood.”

The vice floor leaders of the three parties met at a luncheon Monday to discuss the agenda for the audit.

The three vice floor leaders - the Saenuri’s Kim Do-eup, Minjoo Party’s Park Wan-joo and People’s Party’s Kim Kwan-young - held a joint press conference and said they plan to extend the parliamentary audit to as far as Oct. 19 to make up for time lost during the boycott. However, there was no decision reached on Speaker Chung, and the Saenuri is expected to continue to press the issue of his neutrality.