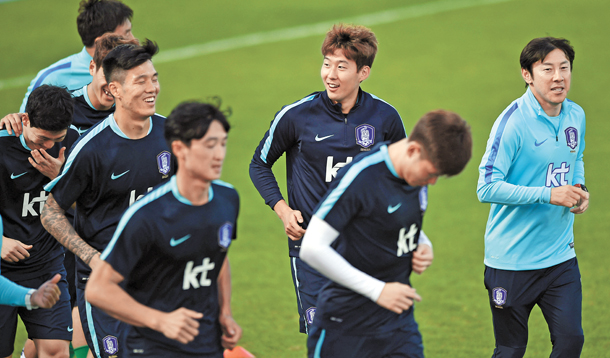 Son Heung-min, second from right, trains with his teammates at Suwon Sports Complex in Gyeonggi on Monday upon his arrival from England. Son, who has netted five goals and dished out two assists in six outings in Europe for his club Tottenham Hotspur, is expected to be the key player in the upcoming qualifying matches against Qatar and Iran. [NEWSIS]

Can Tottenham Hotspur’s Son Heung-min bring his recent superb form from the English Premier League and make things happen at the international level?

Korea, one of Asia’s big four in football, came out of the first batch of the final qualifiers with a narrow win over China and a goalless draw against Syria, a disappointing result that landed them far from where they’d hoped to be. While undefeated in the group still, Korea now has to bounce back from the two matches to pave a path toward capturing their ninth straight World Cup berth.

Korea, ranked 47th according to the FIFA rankings as of Tuesday, has the edge against No. 85 Qatar. Even in terms of head-to-head records, Korea has the upper hand, with four wins and two draws from its seven past meetings.

But anything can happen in the sport of football, including a dramatic upset that leaves the underdog triumphant.

To prepare themselves then, not just strategically but mentally, Son Heung-min and the rest of the squad must remember what happened three years ago, the most recent match against Qatar.

On March 26, 2013, in Seoul World Cup Stadium during the final qualifiers for the 2015 Brazil World Cup, Seoul and Qatar clashed. Although Korea anticipated an easy win, Qatar wasn’t going to let Korea get away with it. Tied at 1-1, the Qataris deliberately delayed the time, their players going down to the ground for no reason. The Middle Eastern team was aiming for a draw to earn a point, but just when they thought they would end the game with a tie, Son saved the day with a winner, netting the goal at the last minute of injury time. Korea wiped the sweat off their face as they were able to tally a win and three points.

Football experts conjecture things will not be that different this time around, with Qatar aiming for a 0-0 draw rather than a win. But if Qatar nets the opener first, they will likely waste time to drag the game on.

Visiting Qatari is under great pressure as the last of the group with two losses. New boss Jorge Fossati will try to fix things around, but for the 2022 FIFA World Cup hosts, they need to up their ranks. For them, against Korea, earning a draw is a far more realistic scenario than a win.

Thus, Korea has to score the opener, and this is where Son comes in.

In the English Premier League and UEFA Champions League this year for Spurs, an elite team in elite leagues, Son registered five goals and two assists. Based on numbers alone, Son is, as his manager Mauricio Pochettin puts it, “on fire.”

During the latest game on Sunday against Manchester City, one of the hottest clubs in Europe right now, Son took on an assignment as a lone striker and showed great mobility and dynamic movement up front. At the end of the day, Son added an assist to lift the team 1-0 over City.

As a result of his recent showings, Son was selected as Man of the Match three occasions in September and finally as the Player of Month according to WhoScored.com, a London-based website specializing in in-depth analysis of football data. Without a doubt, Son is the key to the coming games and the offensive effort of Korea is likely to start and end at the tip of Son’s hot feet.

“What’s important is that we should not create a situation that allows the opponents to go for time-wasting tactics,” Son was quoted as saying by Yonhap News Agency. “We need to score first.”

But Son was careful about making any presumptions.

“People think we should be able to score a lot against opponents like Qatar at home,” the 24-year-old offensive midfielder added. “But they are also a good team and it’s difficult to win matches like this one.”

The kickoff for Thursday’s match between Korea and Qatar is slated for 8 p.m.