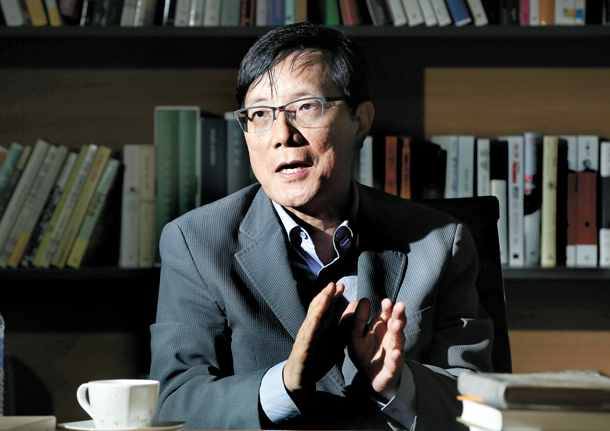 Choi Hee-dong, a nuclear physicist, co-authored “A Diary of Yi Sun-sin” with three other nuclear engineering experts. Choi says that distorted historical accounts regarding Adm. Yi Sun-sin (1545-98) would discredit the war hero of Korea’s Joseon Dynasty (1392-1910) and intellectuals should work on rectifying such errors. [KWON HYUK-JAE]

“Invincible” is an adjective that Koreans often associate with Adm. Yi Sun-sin (1545-98).

Koreans have respected the war hero from the Joseon Dynasty (1392-1910) for as long as they can remember, mostly for ending the period of attempted Japanese invasions (1592-98) with his relentless bravery and strategic mind.

After all, the invasions, known as the Imjin War in Korea, devastated the country inside and out.

Yi saw a resurgence in popularity two years ago with blockbuster hit “Roaring Currents” (2014) that depicted the epic Battle of Myeongnyang in 1597. “Imjinwaeran 1592,” which recently aired on KBS, was a mix of period drama and documentary, and continued Koreans’ interest in Yi.

Against this backdrop, a new book about the legendary Korean admiral is out. Titled “A Diary of Yi Sun-sin,” the book documents his life in remarkable detail, translating into Korean the “Nanjung Ilgi,” the 16th-century journal Yi wrote in Chinese. The book is more of a research paper as it also corrects distorted historical accounts of Yi.

Unexpectedly, the book is written by four nuclear physicists.

Choi, Bae and Kim in fact studied under Bak.

The nuclear physicists have been studying Yi Sun-sin and his journal for many years now. Choi and his fellow physicists published in 1998 the translation of the “Nanjung Ilgi.” Over the years, the group has discovered 140 errors in the 1935 version of the document, which had largely been considered by Korean academia as an accurate account.

There are several versions of the “Nanjung Ilgi:” First, the original handwritten by Yi himself, designated as a state treasure (National Treasure No. 76), and kept at his memorial in Asan, South Chungcheong; second, a version printed 200 years later by the Joseon government; and the 1935 version that a Japanese Government General of Korea made.

The JoongAng Ilbo, an affiliate of Korea JoongAng Daily, talked to Choi to find out just what drew these scientists to the legendary admiral and why rectifying errors about the war hero and his saga is so important to contemporary Korean society.

Choi is particularly interested in identifying the names of the people and regions in the “Nanjung Ilgi,” often hitting the road to see the places for himself. So far he’s identified 460 areas that appear in the journal in present-day Korea.

“Nanjung Ilgi” - a 16th-century war diary kept by legendary Korean admiral Yi Sun-sin has been added to Unesco’s Memory of the World Register in 2013. [JOONGANG ILBO]

Q. What made you and your fellow nuclear physicists interested in the “Nanjung Ilgi?”

A. It’s mostly because of our late teacher, Bak Hae-il. We met him in 1970s and he was already so deep in his studies of the Turtle Ship [that Yi designed and used in the Imjin War.] He believed that in order to study the ship, he had to study Yi Sun-sin and the “Nanjung Ilgi.” Because he is a trained researcher, he valued the original historical records and was suspicious about the later materials. That’s why he ended up getting so deep into the original text of the “Nanjung Ilgi.”

He studied physics at Seoul National University and when the Korean War [1950-53] broke out, he volunteered to join the army and served as a staff weather officer for about eight to nine years. After that he worked at the Korea Atomic Energy Research Institute for a while and then studied nuclear physics at the University of Vienna. He was interested in and knowledgeable about many other fields like philosophy and history. He was a genius. He called me a day before he died of lung cancer and asked me to continue the study of “Nanjung Ilgi.”

Has he made contributions to the studies of the Turtle Ship?

Bak argued that the Turtle Ship was a battleship covered with iron armor and suggested evidence to back up the assertion. There were such beliefs before. It was passed down orally, but there were no historical materials to back it up. One day, he was passing by the Sungnyemun [a gate built in 1398] and he noticed how the wooden doors were covered with thin, iron slate. He thought the iron armor that covered the Turtle Ship could’ve been modeled on that slate. He published a dissertation in 1979 with that theory.

How did you get to join his team?

At that time Bae was working with a copy of the “Nanjung Ilgi,” but it was in poor condition. Against that backdrop, we found out that there was a 1935 translation of “Nanjung Ilgi” that was published during the Japanese colonization of Korea [1910-45]. It was around 1978 and 1979. We wanted to take enough time to study it, so we decided to make copies of it. That’s how we got involved. I received the translation to make a copy, and that’s when I fell into the study of the “Nanjung Ilgi.” Some of us went to serve in the army. Others had to complete academic degrees. So it took us decades.

How did the process go?

First, we digitally recorded the 1935 translation of “Nanjung Ilgi,” as close as possible to the original. Later, we compared that with the original, handwritten by Yi himself, as well as a copy kept at his memorial in Asan, South Chungcheong. That alone took us four to five years, mostly because we weren’t historians. There were letters that we couldn’t understand. We resorted to all kinds of dictionaries to find out. But even though some letters were so clear [in the original] they were wrongfully translated. That is how we ended up finding 140 errors in the 1935 translation of “Nanjung Ilgi.”

Top: A statue of admiral Yi Sun-sin stands tall in Sejong-ro, downtown Seoul. Yi is respected not only for his war strategy but also for leadership and record-keeping. Above: Every year, Koreans re-enact the famous Myeongnyang Battle at a regional festival. [JOONGANG ILBO]


What about in novels and movies? What errors are most noticeable to you?

There are so many twists to historical facts in novels. For instance, some write that there is a woman named Yeojin and that she sleeps with the admiral. The word Yeojin appears in his journal entries on Sept. 12 and 14 of 1596 but it’s unclear if it’s a woman’s name. What’s unfortunate is that once such erroneous information emerges, it spreads furthers. Also because of the word dangpa, which means “beat and defeat,” Korean films and dramas often depict in the battle scene Korean ships and Japanese counterparts crashing into each other and only the Japanese battleships being destroyed. Was that the actually case? As a scientist I doubt it. How could two wooden ships crash into each other and only one set of ships be destroyed?

Do you think being a scientist helped you understand the “Nanjung Ilgi” better?

Yes. There were times when we used scientific simulations to fill in the gaps in the journal. For instance, there were names of regions that we couldn’t identify. We would use scientific simulation to figure out where and how the soldiers would’ve made their way to find out what the names meant. Also, often Koreans believe that in the battle of Myeongnyang Yi defeated 130 Japanese ships with just 13 ships. Some stories go even further to up that figure to 300 Japanese ships. But it’s unrealistic that 13 vessels would defeat 130 vessels. Records do say that Japan had 130 ships. But as Yi lured them to the narrow waters of Myeongnyang Strait, not all 130 would have fought. It’s more realistic to believe that Yi’s 13 vessels destroyed 31 Japanese vessels and that the remaining Japanese vessels retreated.

Why is it critical to correct such inaccurate information?

Such errors should be corrected by the intellectuals. I mean, when we say 13 ships defeated 31 ships it makes sense, but 130 or 300 simply doesn’t make sense. When we make such claims to foreigners they raise their eyebrows. What’s worse, such allegations could discredit the lifetime achievements of Yi Sun-sin. That would be a national disgrace.

So it really says in the “Nanjung Ilgi” that 13 ships defeated 31 ships?

What was Yi Sun-sin like based on your study of the “Nanjung Ilgi?”

There are many underlines and symbols that look like codes in the diary. More than 1,000 people’s names that appear in it. Even for a person with excellent memory, it would’ve been hard to know them all. I think Yi used the symbols to identify each of them. Also there is a line that says one of his subordinates lied to him and was given corporal punishment. To lead an army, a commander-in-chief should not be easily fooled. He shouldn’t fall for lies he may be told and in order for him to keep up, he needed to have a detailed memory and to take note of everything. I think the diary helped him with just that - to be in the know.

In your opinion, what made him such a successful leader?

As I said, he was extremely detail-oriented. I think that led him to win in all of his battles. When provisions for the army arrived, he made his subordinates measure them to the smallest measurement unit possible. And then he made them do that over again. In fact, in his diary, there are many records of “doing it again.” Sometimes the provisions were smaller than expected [indicating stealing within the army]. He would give out severe punishment whenever that happened. I think it’s that meticulousness that made him win in battles.