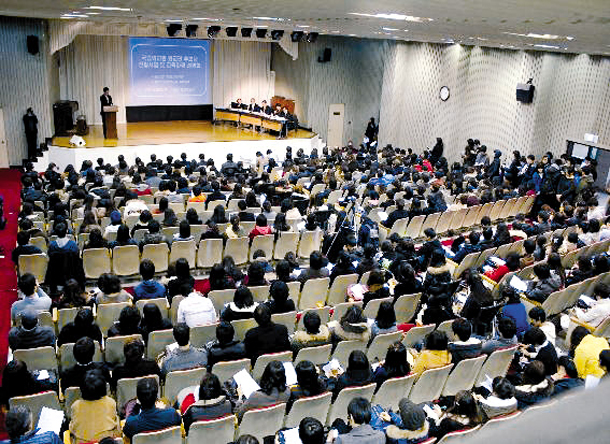 It is a golden age for female diplomats. Since 2000, three out of five American secretaries of state have been women: Madeleine Albright, Condoleezza Rice and Hillary Clinton. Colin Powell and John Kerry have been the only men. The current and previous high representatives of the European Union for foreign affairs and security, the organization’s chief coordinator of foreign policy, are female: Catherine Ashton and Federica Mogherini. For the next secretary general of the United Nations, the public wants a woman to take the post.
The dominance of female diplomats started in Korea long ago. In 2005, more female candidates passed the foreign service examination than male applicants, and the ratio has been constantly rising.

Still, the latest results for this year, released on Friday, are particularly special. Among the 41 applicants who passed the examination, 70.7 percent, or 29, were female, which is the maximum quota. According to the scores, the portion of females should have been 76.3 percent. But because of the gender hiring target that forbids a certain gender from making up more than 70 percent of seats, three additional male candidates were accepted.

At this rate, 70 percent of new diplomats will be women for sure. Female candidates tend to have better foreign language skills, and at top universities, language and foreign affairs-related majors are mostly women. In fact, 26 out of 28 students in the department of foreign affairs at Seoul National University in 2008 were female. Just like the elementary school teacher, the diplomat is likely to be a profession associated with women.

In the United States, it was once rare for a woman to be appointed ambassador. The justification was that a male ambassador’s wife would play a diplomatic role, whereas a female diplomat would often be posted by herself and require additional staffing. The U.S. State Department often reflected wives’ activities in ambassador evaluations.

While gender discrimination in the diplomatic field has decreased, it does not mean all is well. Many female diplomats still go to assigned posts without family. Female diplomats are more vulnerable in dangerous regions, and gender discrimination is still serious in some Islamic countries. When Albright visited such regions, high officials there often left the country to avoid dealing with a female counterpart. If the dominance of female diplomats is an irreversible trend, we need to seek solutions to overcome these obstacles.