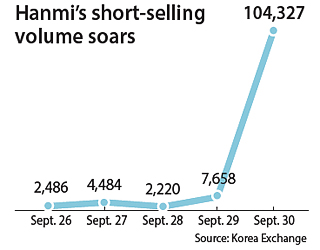 The short-selling came in between two announcements - after the company disclosed it had signed a $910 million contract with American pharmaceutical giant Genentech for a cancer drug and before it revealed that a partnership with German drug maker Boehringer Ingelheim on another cancer treatment was terminated - raising suspicions of foul play.

After the Boehringer Ingelheim announcement Friday morning, 104,327 shares were offloaded through short-selling, the highest since the company first went public in July 2010. In comparison, Hanmi’s daily average volume of short-selling this year was 4,850 shares.

The short-selling on Friday reached as high as 61.6 billion won ($55.6 million), close to the monthly total of September, fueling suspicion that short sellers were responsible for Hanmi’s price plunge.

The possibility is high that investors who did the short-selling before 9:29 a.m. on Friday, when Hanmi Pharmaceutical officially disclosed it had canceled its contract with Boehringer Ingelheim, acquired the same news before the public did.

These offloading investors benefited greatly from a share price increase the previous day, when at 4:33 p.m. on Thursday, Hanmi Pharmaceutical said in a regulatory filing that the company had signed a $910 million contract with Genentech, equivalent to 76 percent of Hanmi Pharmaceutical’s annual revenue of 1.31 trillion won.

“Normally, it would be hard to understand why anybody would want to sell shares after such a huge deal,” one analyst said.

Another factor that has stirred controversy is the modest increase in purchase volume of Hanmi Pharmaceutical shares following Thursday’s Genentech announcement. Last year, the company’s stock price would jump at least 10 percent after it signed similar contracts, but Hanmi Pharmaceutical shares started Friday at 649,000 won, only 4.68 percent up from the previous day’s close.

Even if stock prices go down, foreign and institutional investors can make gains through short-selling. Current laws in Korea make it easy for these two groups of investors to borrow stock, while retail investors have to go through a more difficult process in order to short-sell.

“Unlike institutional and foreign investors who borrow stocks over the counter on mutual contracts, retail investors are only allowed to borrow stock through brokers,” said Park Chang-ho, a representative from an association that supports improvements in the short-selling system.