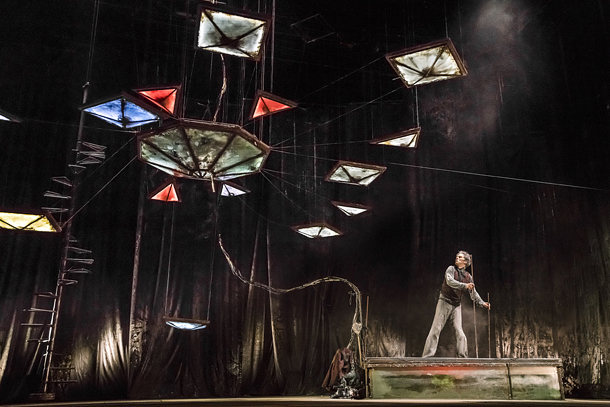 As the government body that supports the arts, screen and creative industries across Scotland, Creative Scotland hosts a range of festivals including the famous Edinburgh Festival. Above is a scene from “The Toad Knew” during the Edinburgh International Festival in August by a renowned Swiss-born circus theater maker James Thierree, the grandson of Charlie Chaplin. [RICHARD HAUGHTON]

For nearly a year, Koreans have been enjoying cultural performances and exhibitions from France while the French also had a taste of Korean culture in their hometowns thanks to hundreds of cultural events organized for the “2015-2016 Korea-France Year.” As many of the French events come to an end, the Korean government is preparing for another year of cultural exchange, this time with the U.K.

According to the Ministry of Culture, Sports and Tourism, then Culture Minister Kim Jong-deok, together with John Whittingdale, then U.K. Secretary of State for Culture, Media and Sport, decided to designate the next two years as the “2017-2018 Korea-U.K. Year” during the U.K.-Korea Creative Industries Forum last March in London.

To brainstorm how the two countries can cooperate in the creative industries, a group of performing arts experts from the U.K. have been invited to Seoul. On Thursday night, the group, composed of about 25 cultural experts from the U.K., will meet up with about 200 Korean performing arts experts in Daehangno, central Seoul, for a networking event.

“It’s quite unprecedented for such a large group of cultural experts from the U.K. to visit Korea at once,” said Martin Fryer, Director of the British Council Korea. “It testifies the dynamics of Korea’s performing arts market that’s been rapidly growing over the recent years. Through the “2017-18 Korea-U.K. Year” that begins in February, we hope cultural exchanges between the two countries become more frequent.” 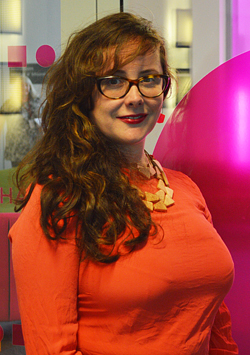 ‘Cultural exchanges are some of the most important international projects at this stage in human history.’

Cultural experts from the U.K. include Laura Cameron-Lewis, Head of Dance at Creative Scotland, the organizer of the famous Edinburgh Festival; Mark Ball, Artistic Director of the London International Festival of Theatre; Dick Penny, Managing Director of Watershed, the U.K.’s first dedicated media center, among others.

Prior to their visit, the Korea JoongAng Daily interviewed Cameron-Lewis, who has more than 20 years of experience in the arts in Scotland, via email. Prior to her appointment as the Head of Dance at Creative Scotland, she was a Director of The Work Room, which is a purpose built independent dance space and center for choreography. Here are some edited excerpts from the interview.

Q. I know that you’ve supported many artists and companies to develop artistic works. I guess it’s the same case around the world that dancers need support. In your opinion, what’s the most urgent support that dancers across the world or in Scotland need?

A. I think that most of all, dancers need our empathy and respect for the difficult work that they do. Being a dance maker is a calling, and those of us who have the courage and the inspiration to do it in the first place, should be supported by those of us with experience and understanding of how the networks of dance operate. We should help these dance makers find their place, exciting people to work with, and people passionate about seeing and presenting dance. Wherever people are making dance in the world, they need advocates to trust in what they are trying to discover, and connect them to interesting new relationships.

I heard you’ve established the dance festival called “Pioneers of Performance,” which is known to be a very innovative model. Can you explain more about what it is and how and why you developed it?

“Pioneers of Performance” was built on the foundation of curiosity, appreciating that people are generally inquisitive and willing to engage in conversations that arouse their curiosity. There’s an approach to programming dance that assumes there is a “dance audience” out there, and “Pioneers of Performance” was about finding people who didn’t yet know whether they were “dance audiences” or not. [The performances showed] four pieces of exciting works of dance and performance, on a one day bill of [shows] which included space for conversations with the people who lived in that place. Usually when work tours in Scotland, it tours as a single piece of work. “Pioneers of Performance” was about creating a range of experiences in dance, through which, curious people could pioneer through the four shows without the sense that they had to love any one piece. If they didn’t like something, it was fine, because something else was about to start. Lowering the stakes in terms of personal taste for each of the performances was very important to make an atmosphere which was friendly and open, so that experimental work could meet new people.

In June, you were appointed as the Head of Dance for Creative Scotland, which organizes the Edinburgh Festival. What can we expect to see from your part at the festival?

Creative Scotland is the government body that supports the arts, screen and creative industries across all of Scotland, on behalf of everyone who lives in, works in, or visits Scotland. As part of that, Creative Scotland funds a range of festivals across Scotland, from the Edinburgh Festivals, to festivals such as St Magnus in the Orkney Isles. Another example of the diversity of festivals in Scotland is the Unlimited Festival celebrating the work of world-leading disabled artists, or there is the Ceolas Festival of Gaidhlig song, celebrating one of Scotland’s indigenous languages and cultures, based on the island, Uibhist a’ Deas in nan Eilean Siar. My aim for Scottish dance and artists is for networks across Scotland and the world to be opened up to the kinds of performance work and questions being devised by Scotland’s incredibly creative and innovative people.

I’ve read the article “Why I Love Edinburgh” you wrote in 2012. In your opinion, what are the success factors of Edinburgh Festival? Why is culture and arts so valued in the city?

There’s a lot that goes into making Edinburgh a special destination for people from all over the world, and it’s difficult to distill it down to one thing, but if I had to pick the most important thing, I’d say it is the warm Scottish welcome and the openness of Scottish people and our arts sector to influences from all over the world. Edinburgh and Scotland have a vibrant culture year round, and in Edinburgh specifically, we love the fact that every August the whole world arrives on our doorstep and we’re never tired of rethinking and reconsidering meaning and human endeavour through the artistic works brought to Edinburgh and crafted with love by so many people from so many cultures. I think in Scotland and in Edinburgh, we’ve always valued learning and self-directed learning, and learning from one another is the best way to do this. We’re very proud of our cultural heritage and are always delighted to learn more about the heritage of other people.

You are visiting Korea for the Performing Arts Market in Seoul (PAMS) UK Night. I heard there’s going to be talks on how Korea and the UK can collaborate in the field of arts and culture. What will you talk about?

I would like to talk about innovation and empathy through cross cultural collaboration, I genuinely think that by making our community bigger by embracing and keeping a dialogue with our Korean cousins we can create the kinds of human interaction that are fundamental to the survival of the human race. At this time in our history, the arts have never been more important as a way of finding new solutions to the global problems we face.

Have you seen Korean dancers? What was your impression?

I have seen Korean dancers many times. I have had the good fortune to have worked with Angella Kwon for many years, and have been part of her team in Scotland to present the work of Korean artists at the Edinburgh Festival Fringe with Assembly and many Korean partners and companies. I think Korean dancers have a beautiful sense of timing and a deep commitment to their art. Their work is incredibly graceful and often imbued with a great sense of humor and curiosity.

Have you seen Korean traditional dance? What kind of synergy can we anticipate from exchanges between Korean and UK dancers?

I love Korean traditional dance, in my previous work, I promoted the work of a classical ensemble led by Mr Kook Soo-ho, with the “Korean Drum” production by Didim Dance Company in Edinburgh. There is a great synergy in the percussive work of Korean traditional dance with the percussive footwork of Scottish traditional dance, and both share a rhythmical language which would be very interesting for the artists to explore together. Artists themselves will always be the best judge of what direction to take a collaboration or a shared research process, but I would hope that this would lead to mutual insight and a changed sense of one’s own practice. It would be fantastic if the artists discovered a shared approach to creating a work of performance together, but even without this kind of visible outcome there is huge value in exchange itself and the relationships which further our understanding of ourselves and each other.

Why are cultural exchanges so important in this era?

As I said before, I think that cultural exchanges are some of the most important international projects at this stage in human history. Without a real mutual empathy for our cousins on the other side of the world, none of us are going to be able to think beyond ourselves to act with the vision and understanding of the wider impact of our actions to undertake the kinds of change that are needed to save humanity.

There are many forms of exchange. In your opinion, what’s the most ideal way to collaborate and exchange between two countries?

I think that it’s always good to begin with sharing working practices and stories from our own cultures with each other. Then a dialogue can be easily extended to exchange of artists’ residencies and projects which enable artists the mobility that they depend upon to thrive within a global context, and the artistic inspiration to be gained from learning another’s culture and techniques. It’s always wonderful when relationships burgeon and deepen and we would hope that our relationships with artists and colleagues in Korea would continue into the future and that we can share much and maybe even make work together when the circumstances are right. With any relationship you have to make sure that there is warmth, good dialogue, and mutual understanding, and we hope that this is the beginning of a long and inspiring relationship.