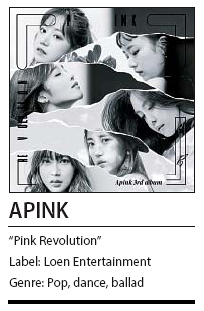 At a time that many popular girl groups flooded the airwaves with seductive dance music, Apink made their debut with a totally different theme - innocent young girls. The public loved it, and their singles “NoNoNo” and “Mr. Chu” were hits.

Apink returns with the same vibrant energy on their new album “Pink Revolution.”

The album kicks off with its lead single “Only One,” a dance track with a hip hop rhythm. The intense love song sung in gentle voices captures the romantic moments spent between a couple. The song is the result of collaboration with hit-makers Black Eyed Pilseung, who produced the hits “Cheer Up” by Twice, “I Like That” by Sistar, among others.

The album also talks of the group members’ friendship through “To. Us,” the lyrics for which Park Cho-rong, the group’s leader, wrote herself. The lyrics express her gratitude to the other girls for bearing the good and bad times together. The acoustic guitar rhythm adds a sentimental and touching feeling to the song.