Incheon Vision 2050 to be ‘Human, Dynamic and Green’

Incheon Vision 2050 to be ‘Human, Dynamic and Green’ 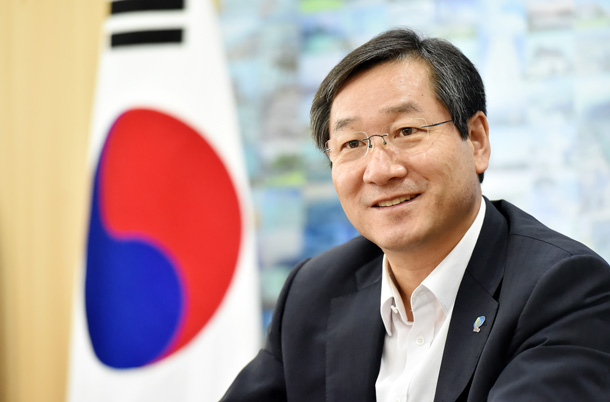 Incheon, a port city bordering Gyeonggi, was the only city in Korea to constantly see a net population influx over the past 23 months among six major cities, while bigger cities such as Seoul and Busan experienced outflows. Incheon has a population of 2.9 million and is set to record 3 million soon. To serve the growing population, the Incheon Metropolitan Government is busy designating new development areas and expanding its public transit system.
The Joongang Ilbo sat down with Incheon City mayor Yoo Jeong-bok to discuss the mayor’s vision and ongoing projects.

Q. What is your major achievement over the past two years?

A. I tried to carry out policies in a way that citizens would feel the change. Above all, we reduced the size of debts that constantly drag the city’s administration down. Besides the debt issue, I sought to improve transportation infrastructure by building KTX express trains in the city and opening the second subway line. We also embarked on the “New Stay” housing project, which allows residents to lease houses at much cheaper prices for eight years. Other areas include making a part of Gyeongin Expressway underground and the expansion of cultural exchange projects with China.


Why did Incheon change its bus route when the city started operating its second subway line?

Incheon’s traffic system has drastically changed with the launch of the airport railroad express and new metro systems, including the Suin Line and the second line. The city also saws a set of newly developed residential areas, including Songdo, Cheongna, Seochang and Nonhyeon.

So, we thought that a new bus route was needed to better connect with new metro lines and the residential areas. We arranged the number of buses and their schedules to suit the demands of students, office workers and seniors — a group that uses the public transit system most.

To change the bus line, we formed a specialized task force and hired an outside organization to carry out research. We invited citizens and outside experts to the discussion table to share their opinions. After completion, the city distributed 1.1 million brochures to households. Despite these efforts, complaints have been reported. We will keep monitoring the situation and improve the system.


The second line’s unmanned system attracted a lot of attention.

The unmanned system is built upon a system named Communication-Based Train Control by Thales. The system is applied to a light-rail train connecting Busan and Gimhae and the Shinbundang Line in Seoul Metro. A control center operates without the existence of engineers, but it can precisely manage trains’ speeds, locations and door openings. The second line is equipped with emergency exits, a sensor detecting derailment or fire and an intercom.


But the second line experienced a series of accidents within eight days of opening.

Before the launch, we inspected the entire system and test-drove the subway trains. But the problems that occurred in the beginning phase caused inconvenience to citizens. We have thoroughly investigated the cause of the accidents and plan to fix the system to ensure citizens’ safety.


The Suin Line, a subway line that connects Incheon with Suwon, has reopened. How did the reopening take place?

The line reopened following a 43-year hiatus after the government closed a line that links Songdo and Incheon in 1973. The reopening is meaningful because Incheon is always at the forefront of railroad development. With the launch of Suin Line, we expect a boost in commercial districts nearby stations. The redevelopment of Suin Line will help create a more integrated traffic network encompassing the Gyeongin Line, Airport Railroad Express and the No.7 line of Seoul Metro. When the KTX bullet train opens in Incheon, the line is also expected to further improve the current transit network.


How is the development of KTX and GTX going?

The development of Incheon KTX passed as a part of the national railway network initiative. When it opens, citizens can go to Busan and Gwangju in two hours. Some 6.5 million residents in Incheon and southwestern parts of Gyeonggi will greatly benefit from the new KTX.

The opening of new GTX (Great Train Express) trains that connect Songdo International City and Seoul’s Cheongryangri is under discussion [GTX is a high speed rail faster than the standard metro]. The Ministry of Land, Infrastructure and Transport is studying the feasibility. The ministry will start its official preliminary research in the second half of this year and aims to launch in 2023.

How are other traffic systems operating?

We are trying to transform a partial section of Gyeonggin Expressway into a general road since the section lost its function as an express way due to heavy traffic congestion. Another section of Gyeonggin will be drastically changed into an underground road to ease traffic issues.

The Incheon city consults with the Transport Ministry to improve Yeongdong Expressway. Also on the agenda is the development of a new city office because the current building is too old. The growing population in the city translates into the increasing demand for administrative support, which requires more resources and spaces. We plan to look at the cases of other cities and will hold meetings to listen to the opinions of citizens and experts.


How is Incheon prepared for the growing population, which will likely reach 3 million sooner or later?

We have rolled out a plan called Incheon Vision 2050 where the city outlines the key values in the future. The values are Human, Dynamic and Green. To achieve these core values, the city now seeks to come up with a more specific agenda and objectives. We will make policies that suit the 3 million inhabitants of this city.

What is the direction for city management for the second half of this year?

Incheon will be focused on four areas — improving people’s livelihoods, the traffic system, the environment and marine development — all for the sake of citizens’ happiness. The city will come up with a welfare system that fits the environment and demographics of Incheon.
We also plan to complete the railroad network that connects citizens with every corner of the city and beyond, as well as improve access to nearby islands. We will pay attention to sustainability and the environment to make Incheon a global green city.