Family cries foul over cause of death

Family cries foul over cause of death 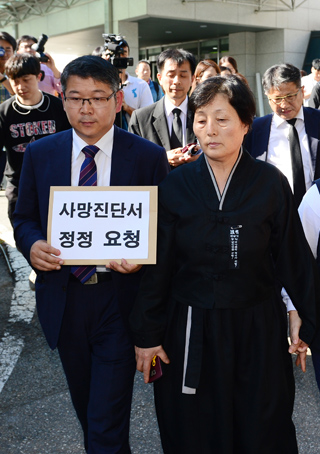 Park Gyeong-suk, the widow of the late Baek Nam-gi, and Lee Jeong-il, the lawyer who represents the victim’s family, hold a press conference on Tuesday to demand that the hospital change the death certificate. [NEWSIS]

The surviving family of a farmer activist who died after being hit by a police water cannon challenged on Tuesday a doctor’s judgement that the victim died of illnesses.

The controversy started after Baek Nam-gi, a 69-year-old farmer from Boseong, South Jeolla, died on Sept. 25 after more than 300 days of treatment at Seoul National University Hospital after being shot with a water cannon at an antigovernment rally on Nov. 14, 2015. He lost consciousness before being taken to the hospital and received brain surgery by Dr. Paek Sun-ha, but did not regain consciousness.

Immediately after his death, police announced a plan to conduct an autopsy to verify the cause of death. A local court struck down an initial request but later issued a warrant, though it still required the consent of the victim’s family.

Baek’s family held a press conference on Tuesday to demand that the Seoul Jongno Police Precinct make public the entire contents of the warrant. They also demanded that the hospital change the death certificate, stressing that they do not want an autopsy.

Dr. Paek, professor of the Department of Neurosurgery at the Seoul National University College of Medicine and Seoul National University Hospital, was the primary doctor of the victim. He pronounced last week that the farmer died of cardiopulmonary arrest and said it was a natural death. The victim’s family challenged this and the hospital conducted a special investigation into the case, starting Saturday.

“Six days before the death, the patient suffered acute renal failure,” Dr. Paek said in a press conference on Monday. “Cardiopulmonary arrest due to hyperkalemia [high potassium in the blood] was the cause of death. This is different from the Korean Medical Association’s guideline that cardiopulmonary arrest, which is seen in all deaths, should not be recorded as the cause of death.”

He said the patient’s cardiopulmonary arrest due to the hyperkalemia could have been prevented with medical treatment such as dialysis. “The family did not want aggressive treatment for various complications based on the patient’s will,” he said, concluding that the victim died by suspending life-sustaining treatments and that this differed from the usual definition of an unnatural death by external cause.

“If he died even after the best possible treatments, including dialysis, the contents of the death certificate would have been different,” he said. “In this case, it would have been recorded as an unnatural death by an external cause.”

The Seoul National University Hospital formed a special committee to investigate the controversy. Five experts participated in the probe and challenged Paek’s conclusion.

“If the underlying cause of death was acute subdural hematoma, he should have recorded it as an unnatural death,” said Forensic Medicine Professor Lee Yoon-seong of the university’s college of medicine, who chaired the investigation. “I believe it should have been recorded as an unnatural death. But the death certificate is the area of an individual physician, not the institution.”

Lee Jeong-il, the lawyer who represents the victim’s family, said Baek clearly died of external trauma caused by the water cannon, not cardiopulmonary arrest. “We are looking into the legal procedure to correct it,” he said.