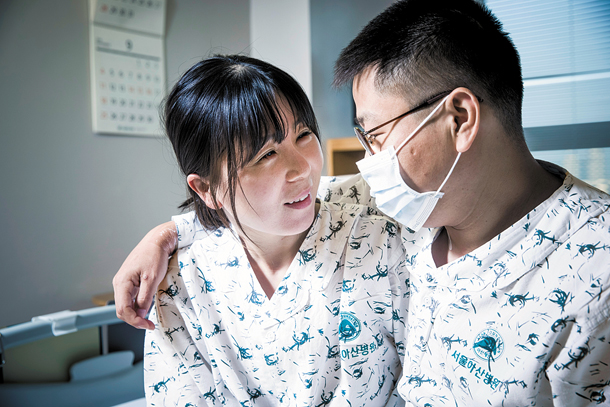 A kidney transplant patient, Song, and his wife and donor, Shin, before surgery at Asan Medical Center, Seoul, on Sept. 21. Shin donated her kidney and the couple is recovering from the successful operation. [PARK JONG-KEUN]

A kidney transplant patient surnamed Song was given the gift of life by his wife at Asan Medical Center in Seoul on Wednesday.

“I am so thankful for my wife,” Song said, “who gave away a part of herself without even thinking about it.”

The operation was successful and the couple is recovering fast.

Song was diagnosed with diabetes at the age of 20. He has suffered from chronic renal failure since last year and was told in July that kidney dialysis or a transplant were the only viable options. His wife, Shin, then decided to donate her kidney. Shin had met Song at the age of 20. They married in 2008 and have one daughter.

“As a nurse,” she said, “I know how difficult kidney dialysis is and I thought I should be the donor, for my family.”

Last year, there were 990 kidney donors and 312 of these were spouses of the recipients, according to the Centers for Disease Control & Prevention. There were more sibling donors until 2012, when transplants between incompatible blood types became allowed thanks to developments in medical science. Kim Soon-il, head of the organ transplant center at Severance Hospital in Seoul, said, “More people willingly give away their kidneys to spouses, although male partners are less likely to have healthy kidneys fit for transplant, as a result of their social lives (alcohol consumption).”

In the case of liver transplants, child donors to parents are more prevalent. Indeed, out of 942 liver donors last year, 619 were children. Lee Sung-gyu, a professor at the liver transplant surgery department at Asan Medical Cetner in Seoul, said, “Most liver patients are in their 50s and 60s, and a transplant from a spouse around the same age is difficult.” He added, “Donations from children are more successful and lead to a faster recovery for both the donors and the recipients.”

The 24-year-old Jang In-hwan donated his liver for his father, who was diagnosed with liver cancer in July.

“I had no reason to hesitate,” Jang said, “a donor’s liver recovers fast and it was a simple operation.”

Suh Kyung-suk, head of the transplant center at Seoul National University Hospital, said, “Some of the healthy liver is transplanted during the operation, but the remaining liver grows back to its normal size in four months.”

The Korea National Institute for Bioethics Policy plans to carry out a follow-up study of organ donors’ post-operation health. As of now, organ recipients’ survival rates remain at 91 percent for kidney transplants and 73.8 percent for liver transplants.