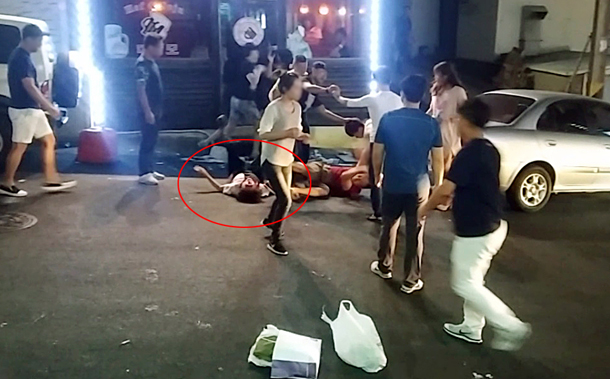 A female owner of a restaurant in Yeon-dong, Jeju, lies face-up on the ground (indicated by red circle) on Sept. 9 after she was assaulted by eight Chinese tourists, who refused to pay for their food after the owner told them not to bring in alcohol from outside the restaurant. [JEJU WESTERN DISTRICT POLICE PRECINCT]

In downtown Jeju on Sunday night, booming sounds echoed down the streets as three drunken Chinese men pounded on a video arcade in front of a game room. A few passing women were so startled they let out shouts of surprise, but the men only kept on whooping loudly.

“After a Korean woman was murdered in a cathedral in Jeju,” said Park Soo-jung, a 32-year-old resident of Jeju, “seeing big Chinese men scares me.”

On Sept. 22 in Yeon-dong of Jeju, an area often crowded with Chinese visitors, police officers tried to prevent two Chinese tourists from jaywalking.

“Do not jaywalk!” the officers called out to them in Mandarin Chinese.

Left: Two drunken Chinese men jaywalk across Baozen Street in Yeon-dong, Jeju, on Sept. 22, before being stopped by police. Right: Chen Guorui, 50, who stabbed to death a Korean woman praying in a cathedral in Yeon-dong, Jeju, on Sept. 17, receives an on-site inspection by police on Sept. 22. Police decided to reveal Chen’s face to the public, an unorthodox move that police said was appropriate because of the gravity of Chen’s charges. [JEJU WESTERN DISTRICT POLICE PRECINCT]

One of them, a 42-year-old Chinese man surnamed Ma, reportedly answered, “Why are you picking on us when everyone else is jaywalking?”

The crime scene in Jeju has been a frequent topic among media reports lately. On Sept. 9, eight Chinese tourists savagely beat a Korean restaurant owner in Yeon-dong when she told them they couldn’t bring in alcohol purchased outside the restaurant. The owner was hospitalized, suffering from a brain hemorrhage. The tourists, currently under investigation, have been banned from leaving the country.

On Sept. 17, Chen Guorui, a 50-year-old Chinese tourist, stabbed a Korean woman while she was praying in a cathedral in Yeon-dong. She was pronounced dead the next day. Authorities plan to charge Chen with murder.

According to the Jeju Provincial Police Agency, the number of crimes committed by Chinese tourists has been growing annually since 2002, the year when Chinese visitors were first allowed to visit the island without a visa.

In 2013, Jeju police recorded that 134 Chinese tourists committed crimes. This number doubled by 2015. The number may double again this year, as it has already hit 240 as of July. This includes 84 murders, robberies, cases of sexual assault or theft - making up nearly 70 percent of the crimes committed by foreigners on Jeju Island.

The influx of tourists is also taking a toll on the order and environment of the island.

According to Jeju police, tourists’ petty acts of rule-breaking, like jaywalking and littering, grew from 785 cases in 2014 to 1,267 in 2015. As of August this year, police recorded 3,750 such cases, among which police suspect some 95 percent were committed by Chinese visitors, even though Chinese only constitute about 85 percent of Jeju’s visitors.

Streets like Baozen Street in downtown Jeju, which is frequented by Chinese visitors at night, often appear in the morning filled with trash, leftover food and cigarette butts.

“I don’t know why visitors won’t use public bathrooms available in buildings,” said a 52-year-old who runs a restaurant on Baozen Street. “Every morning I see that people peed on the wall of my restaurant.”

The JoongAng Ilbo, along with Jeju police, created a map of Jeju Island depicting the crime scenes and their occurrence rates. The offenses peaked in Nohyeong-dong and Yeon-dong in Jeju, where 120 Chinese tourists committed crimes.

“Using the map, police will be creating a new plan to fight crimes in the areas,” said Lee Cheol, who leads an international crime investigation team at the Jeju police.

The spike in crime by tourists has also led to a call for the recruitment of more police officers who speak second languages.

There are 17 police officers who can speak foreign languages at the Jeju police, of whom 10 speak Chinese, four Vietnamese, two English and one Japanese. The local police force also hired 37 interpreters, of whom 16 speak Chinese.

“Given the hike in the number of visitors to the island, one police officer needs to take care of some 500 cases of public security,” said Hwang Jeong-ik, professor of police administration at Jeju International University. “Jeju police will have to expand the number of officers who can speak Chinese and strengthen its language training programs for its employees.”

The government of Jeju Special Self-Governing Province announced on Monday that it is “discussing with the central government and national police ways to establish an external affairs department in Jeju Provincial Police Agency.” 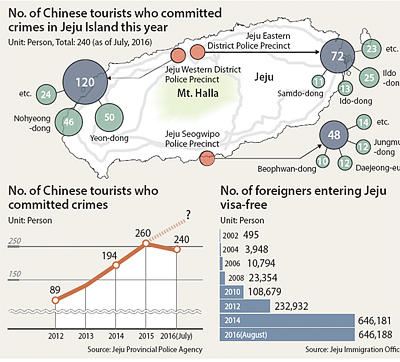 “While crimes committed by foreigners on Jeju Island are 2 percent of all crimes in the island,” said Kim Han-soo, prosecutor at the Jeju District Prosecutors’ Office, “the district prosecutors’ office has only two prosecutors handling immigration cases, and is in need of more prosecutors.”

He added, “Currently we’re being assisted by 10 translators, but we will need more prosecutors who can speak second languages in Jeju.”

Meanwhile, more citizens are taking issue with the policy that allows Chinese tourists to visit the island visa-free. Currently, citizens of 189 countries can enter the island without a visa and stay up to 30 days.

A petition titled “Abolish the free-visa policy on Chinese tourists visiting Jeju Island” surfaced in an online community a day after a Korean woman was stabbed to death by a Chinese tourist. It received more than 12,000 votes within two days.

Under the visa-free policy, an average of 800,000 foreigners came to the island each year from 2002 to 2016, and a total of 2.97 million tourists came in those years. Among them, 99 percent, or 2.94 million were Chinese, according to Jeju Immigration Office.

And some tourists are staying longer than 30 days. The number of illegal immigrants on the island grew from 282 in 2011 to 4,353 last year. A 27-year-old Chinese citizen surnamed Lee stayed on the island illegally until he was apprehended in a hit-and-run car accident in July. He had entered the island without a visa in April.

“Until the visa-free policy becomes more stabilized,” said Lee Gye-hee, professor of tourism at Kyonggi University in Suwon, Gyeonggi, “immigration authorities at Jeju should conduct mid-stay checkups on all tourists.”

“Jeju Island will be cooperating with the immigration office to improve the visa-free policy,” said Won Hee-ryong, Jeju governor, “and to create a safe island free from crimes committed by foreigners and prejudice against foreign visitors.”