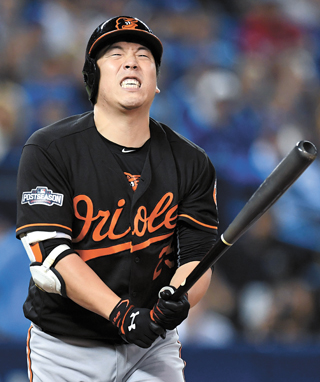 Kim Hyun-soo, outfielder of the Baltimore Orioles, reacts after a strike against the Toronto Blue Jays in an American League wild-card baseball game in Toronto on Tuesday. The O’s suffered a 5-2 loss against the Jays in a walk-off fashion. [AP/NEWSIS]

The Baltimore Orioles and their Korean outfielder Kim Hyun-soo saw their season coming to its end at the hands of the Toronto Blue Jays in the American League wild-card game. Losing 5-2 in walk-off fashion in a game that went all the way to the 11th inning, the O’s were ousted from this year’s Major League Baseball postseason.

In his first Major League postseason game against the Jays at Rogers Centre in Toronto Tuesday, Kim batted second while playing left field and went hitless 0-for-4 to conclude his rookie season in the big league.

It was the Jays that took the initial lead. At the bottom of the second inning, Jose Bautista homered off a four-seam fastball tossed by the Orioles starting pitcher, Chris Tilman. The Orioles, however, answered Bautista’s home run with another dinger. At the top of the fourth while trailing, Mark Trumbo sent Marcus Stroman’s pitch flying for a two-run homer to take back the lead. But the O’s lead was short-lived, with the Jays quickly matching the game in the next inning. The game was deadlocked after the fifth, until the Jays first baseman, Edwin Encarnacion came to the plate in the extra inning at 11th. The Jays, with one out, had Devon Travis and Josh Donaldson on base after hitting singles. With two runners on first and second, Encarnacion jacked a three-run walk-off homer to the left deck, tallying the fourth walk-off home run in the postseason for the Jays in their franchise history.

The game between the O’s and the Jays was as intense and dramatic as any. Aside from the walk-off homer, it was evident that everyone watching the game was immersed in the heat of it all, which got excessive at one point. At the bottom of the seventh, Kim was almost pelted with a canned beverage thrown by a fan onto the field while trying to make a running catch during a flyout to end the inning.

Although his first season in the big league is over, Kim had a rather memorable rookie year.

After joining the O’s with much anticipation and hope, Kim, who had a decorated career in Korea, had to watch as his reputation plummeted while he struggled during the spring camp. After several disappointing outings during spring, Buck Showalter, manager of the Orioles, tried to demote Kim to the minors.

But Kim exercised his contractual right and refused relegation, which made some fans of the O’s unhappy, as was apparent on opening day when Kim was booed and jeered when he walked onto the field. For a while, he was nothing but a nuisance in the eyes of fans and the coaching staff.

But by June, just two months after the start of the season, everything changed.

Although rarely given, Kim exploied any chance he got on the plate, and soon enough, all the tears and sweat he’d shed on and off the field paid off.

When batting a lead-off, or when early in the order, he would often increase the O’s chance of scoring by consistently reaching base. His on-base percentage (OBP) looked solid and others were starting to recognize Kim’s innate talent to select the right pitches and get to bases. The Baltimore Sun, the local newspaper that covers the Orioles, even dubbed Kim “our Ichiro Suzuki,” citing his ability to get to bases.

Such a statement was backed by numbers. During the regular season, Kim batted an impressive .302 and his OBP stood at .382, ranking fourth in his team.

With another year remaining in his contract, Kim is expected to enjoy a more stable season next year.

As for the Jays, they will now play the Texas Rangers and its Korean outfielder, Choo Shin-soo, next. Now after Kim’s exit from the postseason, Choo is the only Korean major leaguer remaining in the playoffs.