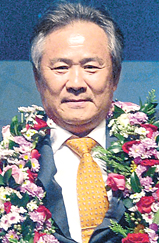 Lee Kee-heung elected as new president of the KOC

During the election for the presidency of Korea’s top Olympic body on Wednesday, Lee aggregated 294 out of 893 votes.

Before the election, Lee came under scrutiny and questions arose as to whether he is a suitable nominee for the job.

The KSF has been embroiled in various controversies while he was still in office, including embezzlement, bribery and negligence of duty, which led to some high-ranking officials of the swimming body to be indited by prosecutors.

As the new president, Lee will serve the KOC until February 2021, covering the coming PyeongChang Winter Olympics in 2018 as well as the 2020 Tokyo Summer Olympics.

Park In-bee will be absent from the LPGA KEB Hana Bank Championship, the only LPGA event that takes place in Korea.

Park, who clinched gold medal at the 2016 Rio Summer Games, was initially expected to make her return at this year’s Hana Bank Championship, which takes place at Sky 72 Golf Club in Incheon, Korea, starting from Oct. 13. But it was reported that Park did not register to play in the event.

Park battled through a thumb injury during the Olympics and earned gold despite the pain. But after the Summer Games, she had been absent from the tour, missing the Evian Championship along the way, the only major event that she is yet to win.

Regarding her plan for the season, the hall of famer said that she will only play in two local events before concluding the season. “Although my injury has gotten better, I want to avoid playing in many tournaments,” Park said at a press conference. “I want to be able to play next year without worrying about the injury.”

The Samsung Lions’ slugger, Choi Hyoung-woo, was selected as the Most Valuable Player (MVP) for the month of September.

According to the Korea Baseball Organization, Choi was selected as the MVP of the month over the LG Twins’ pitcher Ryu Jae-kuk, Michael Bowden of the Doosan Bears and Park Min-woo of the NC Dinos.

For the month of September, Choi made appearances in 23 games to bat .435 while recording eight home runs, 27 runs batted in (RBI) and a .524 on base percentage (OBP).

He topped the league in homers and RBIs for the month while wrapping up September second in hits, OBP and slugging percentage which stood at .788.

He also set a milestone in his career in September, becoming the sixth player in the history of the league to tally more than 30 homers for six straight years, as well as becoming the fourth player to record 30 homers and 100 RBIs in a single season for three consecutive years.

As of Wednesday, Choi is first in the league this season in batting average, RBIs and hits.