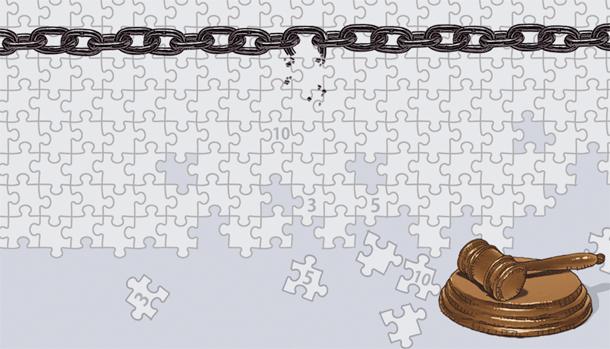 Oliver Wendell Holmes Jr., the longest-serving justice in the U.S. Supreme Court, is also the most widely cited judge in the English-speaking world. His “clear and present danger” doctrine to determine limits in the freedom of speech, press and assembly remains one of the most influential legal concepts in the Western world.

Justice Holmes earned the moniker “the Great Dissenter” because his concise and blunt minority opinions often wielded big influence. He delivered practical opinions based on real-life experiences, going against the traditional doctrine of legal formalism.

His experience during the American Civil War influenced his judgment. Holmes joined the war because he was against slavery. He suffered wounds three times and came out of the fight disillusioned. By the end of the Civil War, even the most vehement antislavery activists had become patriots. Holmes learned from the experience that nothing in the world was sacred.

“The life of the law has not been logic; it has been experience,” he once said. He believed laws should be modified according to the changes and needs of the times. Even if a law is not unjust, it must be revised if it merely serves an elite class instead of the greater masses.

Given his legal thinking, I believe Holmes would have approved of the new antigraft law, dubbed the Kim Young-ran Law, despite some questions on its constitutionality. He may have agreed with the Constitutional Court of Korea based on the same reasoning. A law deemed necessary to rein in corruption at levels beyond the tolerance of ordinary citizens, regardless of some side effects, is valid.

Still, there are some concerns. The law sets strict caps on the cost of meals and gifts that public officials, teachers and journalists can take. I do not have a particularly eager stomach and am quite happy with a meal under the price of 30,000 won ($27), the limit set by the law. I have never been a powerful journalist to be tempted by trips on private jets or luxurious dinners. Therefore, the new anticorruption law does not worry me much personally. I must admit I will miss some of the wine parties since I have developed a particular penchant for the drink. But there is a fine selection of wine available at affordable prices, and I can still enjoy some of the BYOB parties.

Most people subject to the new law will feel no different from me. Still, the law could hurt even reasonable and quite legal relationships. If people begin to shun having a drink or two that usually goes well above 30,000 won in fear of breaking the law, even perfectly honest and rewarding mingling opportunities will become fewer.

Instead, people might meet privately in closed groups where they can safely trust no one will go against each other’s back. The elites will keep to themselves and exclude newcomers. Some of the groups are said to be secretly appreciative of the new law as it can strengthen their exclusivity.

It is not that I oppose the new law, but some loopholes need to be fixed. There must be a mechanism to fend off possible irregularities among inner circles bound by various connections. For them, the 30,000 won limit on meals does not matter because their business deals are already made shrewdly and secretively in a way that cannot be traced except through a whistle-blower from inside.

According to a 2013 study by Horuragi, a nonprofit that protects whistle-blowers, six out of 10 people who have exposed wrongdoings in their organization have been sacked or demoted. Half of them never recovered their jobs. There has to be some kind of legal protection for whistle-blowers. Otherwise, the law will do no more than pick on small fry.

Another disappointment with the new law is the 100,000 won cap on wedding and funerary gifts, which is actually higher than the 50,000 won cap defined in the government workers’ ethics code before the law.

Korea’s unique tradition of guests presenting cash tokens during marriages and funerals, in fact, has long lost its good intentions. It has more or less become an expansive habit and almost like an insurance that can be collected later. The amount that goes into the envelope has become inflated to burden ordinary citizens. Monthly expenditures for the rituals averaged 120,000 won in 2000 and jumped more than 80 percent to 210,000 won last year. It has become a fixed expenditure for every household and is cited as one of the biggest unnecessary expenses that could be saved.

It becomes a heavy burden when business relations are involved. Some in the elite class can collect hundreds of millions of won from marriages and funerals. It is a kind of modern-day tribute by the lower class to the upper class. The ceiling for such a token to so-called public service workers should have been lowered. Outdated customs are best done away with.

Meals can at least benefit the economy, but cash tokens end up in individual pockets. If not, the money limit should have at least been set universally at 30,000 won.

The law should be revisited. Let’s think about practical solutions that Justice Holmes would have suggested.