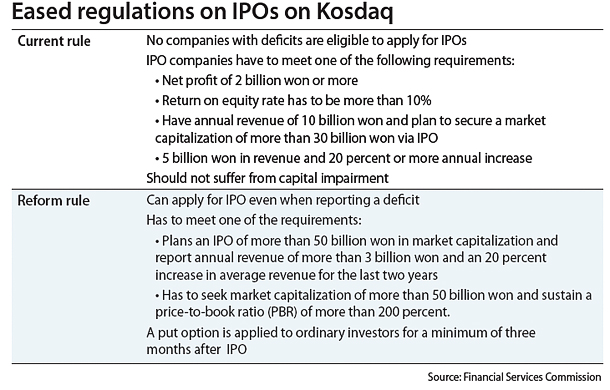 The government is loosening regulations that prevented unprofitable start-ups with good potential from attracting investments through initial public offerings (IPO).

The goal is to foster small but promising start-ups in the hope they can transform into successes like Facebook or Tesla.

The Financial Services Commission on Wednesday announced reforms in IPO regulations that will allow promising but money-losing start-ups to be listed on the secondary Kosdaq market.

The plan comes a month after FSC Chairman Yim Jong-yong announced at a press conference a new set of so-called “Tesla requirements” that will help companies with strong potential to be able to go to the market for funding.

“Tesla, which is now the world’s major electric vehicle maker, was able to grow based on an IPO on the Nasdaq even when it suffered losses,” Yim said. “In order to foster future growth industries through the capital market, there is the need to allow these companies to be listed if the companies’ deficits have been created in the process of building up its growth potential, such as expanding production bases or investing in R&D.”

Under current law, companies in the red are not eligible to apply for IPOs.

There are other conditions that companies seeking IPOs on the Kosdaq have to meet. Companies must have 5 billion won in annual revenue and 20 percent annual revenue increases or a 2 billion won net profit at the time of applying for the IPO.

The new regulations will allow companies in the red to go public if they meet the basic “Tesla requirement,” which is a minimum revenue of 3 billion won and average growth of 20 percent in the last two years. Additionally, the company must plan to raise at least 50 billion won from the IPO.

To protect investors, a put option will be applied for a minimum of three months. A put option allows an investor the right to sell a security at a specific price at a specific time, a safety net in case the stock price drops.

There have been several cases in which companies in the red were able to be listed on the stock exchange under a special law. The law exempted companies that had a certain level of technology acknowledged by experts. Under the new regulations, IPO underwriters could recommend companies that lack capital or a production base for an IPO if they have strong potential. However, in those cases a 90 percent put option will be placed for a minimum of six months after the IPO as a safety net for investors.

The FSC noted that while Korean companies that had successful IPOs did better than companies in other countries, their performances often deteriorated. It blamed over-strict regulations on companies allowed to do IPOs.

The return-to-assets (ROA) ratio for newly listed companies on the Kosdaq was 15.2 percent, while the average on the New York Stock Exchange and Nasdaq was around 10.6 percent and in the U.K. it was minus 27.4 percent. However, among the 248 companies that were listed on the Kosdaq between 2010 and 2015, performances declined after three years.